Lore (May 24th and 25th at the Cleveland Cinematheque) 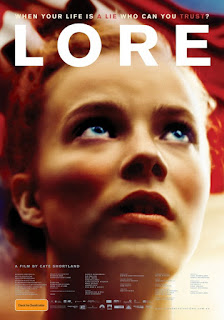 I wouldn't hold my breath, but I applied to a paid (so they claim) online writing gig regarding movies in the war genre. I need the money. But watch, they'll hire a pacifist monk...or maybe a young Amish girl who doesn't even see movies, and is incapable of using electricity and going online. Neither would be very suited for the position of war-movie blogger. But they'd easily get hired over me. You know how HR specialists go for that "diversity" in the workplace to earn PC points.

So, if I'm not hired, what readers will miss out on are appreciations of untypical battleground fare like LORE, a German/Australian/UK WWII tragedy. It is heavy going, probably one of the feelbad movies of 2012. But it showcases an aspect of war that many moviemakers blithely gloss over: the losers.

Yes, except for Hollywood's now-politically incorrect romanticizing of the Confederate south rising again proudly in such oldie epics as BIRTH OF A NATION, GONE WITH THE WIND and SO RED THE ROSE, mainstream moviemakers don't find much terribly sexy or action-packed about dwelling on the travails of any defeated enemy. Still, when something does get made that confronts that melancholy theme - from OPEN CITY to DOWNFALL - it's almost of necessity a singularly passionate, grownup statement.

Such a drama is Cate Shortland's LORE, set in occupied Germany in 1945, during the close of the Second World War in Europe. The title character, Hannelore Dressler - "Lore" for short - is the Aryan-beautiful daughter and eldest child in the family of a Nazi officer with four other kids, dwelling in Third Reich luxury in the Black Forest. But Berlin has just fallen, and both Dressler parents fear reprisals by vengeful Allied soldiers (their own neighbors, far less high on the Nazi rankings, turn their backs on the family as well). Becoming refugees, the father simply burns family papers and flees, while the mother, a National Socialst true believer who sees no future after the death of Hitler, plans to turn herself in to authorities and orders Hannelore to take the children to relative safety of a grandmother in Hamburg.

It's a grim overland trek for the five increasingly exhausted and starved children, past occasional dead bodies, and - in the towns - breadlines maintained by Allied soldiers that make ordinary Germans confront photos of Jewish concentration-camp victims (many of the proud Germans simply think it's a hoax conspiracy, a bit of foreshadowing of our own era). En route, however, overtaxed Hannelore gets an unexpected, rather menacing guardian - Thomas, a sullen and possibly violent young man who had previously been imprisoned. He advises them on the best route overland, through the dreaded Soviet-occupied zones, and he feeds the younger kids - thus earning their friendship.

But to the nubile Lore, Thomas poses a constant sexual threat, and furthermore his all-important passport papers shock and offend her on another level, as they identify him as one of the Jews she has been taught to loathe.

LORE is far less built on thrills than on moments of despair, shocking recognition and paradigm-shifts, as Lore, brought up in the Hitler Youth, learns, finally, to disbelieve her German elders' lingering defenses that they and their Fuhrer did nothing wrong in bringing about this calamity. Whether one buys into Thomas as a transformative experience for the heroine is a question that would leave lots of SPOILER ALERT notations if gone into detail (and most savvy viewers will see his twist coming way in advance). But the downbeat picture qualifies for me indeed as an untypical sort of war movie - one with no big-scale battles or special effects, that instead reflects the dawning sense of boundless guilt and shameful epiphanies that one's own people were not the good guys in this incomprehensible tragedy.

The G.I. Joe in me now asks, where's the Japanese version of this story? Keeping in mind that, back in the 1980s, there was a two-part cartoon adaptation of Keiji Nakazawawa's "Barefoot Gen" graphic novel that partially addressed that side. If I get hired to expound on war movies I'll work harder to track
those down. But it's looking to be a, well, losing battle. (3 1/4 out of 4 stars)
Posted by Bob Ignizio at 8:43 AM