[LE GRAND AMOUR screens Friday May 31st at 5:15 pm and Saturday June 1st at 7:00 pm at the Cleveland Cinematheque.] 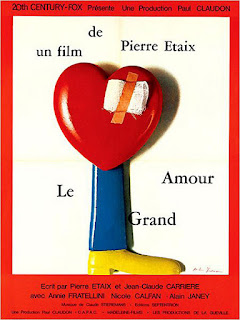 LE GRAND AMOUR opens with a jaunty little pop song about the virtues of infidelity, cluing the audience in right away as to its subject matter and tone. After the credits, we settle in to hearing Piere (Etaix himself) relate the story of how he came to be married, and the course that relationship took. Right off the bat Piere admits he doesn't really know how he wound up marrying his wife Florence (Annie Fratellini), and that he could just as easily have tied the knot with a number of other women. But Florence it is, and at first the couple seems happy.

The bliss doesn't last, though. The couple's peace is initially disrupted by gossiping busy-bodies who each add a layer of embellishment to a perfectly innocent encounter Piere has with a passing woman until it's so blown out of proportion as to send Florence packing to stay with her parents. But then real temptation arrives for Pierre in the form of young and pretty new secretary Agnes (Nicole Calfan). The girl isn't particularly interested in Pierre, but that doesn't stop him from pursuing her, egged on by the dubious advice of his friend Jacques (Alain Janey). All throughout Pierre's recounting of the tale, he frequently veers from reality into visually delightful flights of imagination.

I'll admit it. I was not looking forward to watching LE GRAND AMOUR. In fact I did my best to push it and the other films in the Pierre Etaix series showing at the Cleveland Cinematheque in May and June off on Charles. You see, all I knew about Etaix was that his films hadn't been seen in a long time due to legal issues with the distributor, and that he collaborated with Jacques Tati on some of that director's most famous films. It was the second of those things that had me alarmed. You see, although I respect Tati's films for their singular vision, I don't actually like them. I tend to think that comedies ought to make me laugh, and Tati's films maybe pry a handful of slight smiles out of me at best. So when I finally sat down to watch LE GRAND AMOUR, I expected a similar experience. Thankfully I was wrong.

I laughed quite a bit during LE GRAND AMOUR. Where Jacques Tati goes to great pains to create elaborate fantasy worlds, an admirable accomplishment to be sure, I preferred the way that Etaix injects fantasy into a more realistic, grounded world. And while much of the humor is visual, as it the case with Tati, it isn't full on pantomime. It would be foolish to try to denigrate Tati. Even though he leaves me a bit cold, as many other critics besides me will tell you, he's a master at what he does. And I agree. I just find Etaix more to my personal tastes, at least based on this film. The rest of the films in this series may or may not strike me the same way, but at least now I'm looking forward to the prospect of watching them rather than dreading it. 3 1/2 out of 4 stars.
Posted by Bob Ignizio at 10:59 PM