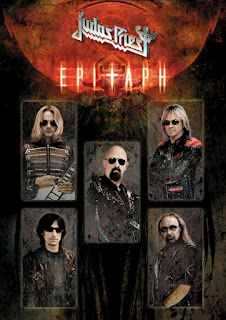 
CLOSING NIGHT OF EPITAPH -
THE BAND'S FINAL WORLD TOUR
FILMED AT
HAMMERSMITH APOLLO LONDON IN MAY 2012
ELECTRIFYING LIVE VERSIONS OF 23 CLASSIC TRACKS FROM ALL 14
JUDAS PRIEST ALBUMS FROM 1974 TO 2008
SHOT IN STUNNING HD WITH A 5.1 SURROUND SOUND AUDIO MIX
Judas Priest, the heavy metal legends whose influence on generations of musicians and metalheads is incalculable, celebrate their 40th year as recording artists with the global cinema release of the live concert EPITAPH, a unique live career retrospective. EPITAPH will be screening at the Capitol Theatre (1390 W. 65th St., Cleveland) on Wednesday, May 15th at 7:00 PM and Tuesday, June 4th at 7:00 PM.
From the band: “The Epitaph world tour came to an exciting conclusion at the renowned Hammersmith Odeon (now known as the Apollo) in London. Knowing our fans around the planet recognize that venue for many legendary metal moments, and of course with
Judas Priest being a British metal band it was the perfect gig for us to film and record. Big thanks as always to you our metal family of fans - so start banging your heads one more time with us as we scream together ‘The Priest is back!’’
Omniverse Vision, the global distributor of the film, has confirmed screenings in key markets in the US and is excited to announce a partnership with Tugg, a web-platform that will enable fans to request a screening of EPITAPH at their local theater and create their own event.
This is a limited opportunity for fans to experience the excitement of "one of the most important and influential metal acts of all time" (Kerrang!) at this historic gig in magnificent HD with incredible 5.1 surround sound audio.
Judas Priest's lineup comprises lead singer Rob Halford, lead guitarists Glenn Tipton and Richie Faulkner, bassist Ian Hill, and drummer Scott Travis.
Heavy metal historians will regard EPITAPH as the most far-reaching live concert recording in the band's career.  The set revisits the climactic closing date of the 50-week Epitaph World Tour, captured live at London’s HMV Hammersmith Apollo on May 26, 2012.  Adding to the drama is the fact that this was Judas Priest’s final large-scale world tour ever.  EPITAPH’s 23 tracks represent at least one song from every one of the band’s 14 studio albums, from 1974’s Rocka Rolla ('Never Satisfied') to 2008’s Nostradamus ('Prophecy').
In the special case of British Steel, four songs are featured: 'Rapid Fire, 'Metal Gods', 'Breaking The Law' and perennial set closer, 'Living After Midnight'.  Others exempted from the one-song-quota are the LPs which appeared before and after British Steel.  The first of these is 1979’s Hell Bent For Leather (UK title: Killing Machine) which lends the title song as well as 'The Green Manalishi (With The Two-Pronged Crown)'. The other LP is 1982’s Screaming For Vengeance, source of 'The Hellion',  'Electric Eye' and 'You’ve Got Another Thing Coming'.
“They have epitomized the genre with their Harley riding frontman, rapid-fire guitar assaults, and spectacular stage shows,” wrote journalist Bryan Reesman in his liner notes for 2004's leather-bound, metal-studded Metalogy box set.  “Influential, innovative, and exuberant in expression,” he wrote, “they are the true Metal Gods who have been as unwavering in their desire to expand the boundaries of their music as they have been in crossing international borders to deliver it to their disciples.”
“Unabashedly committed to their cause, and unrepentant in proclaiming themselves a true heavy metal band even when others have shied away from the term, Judas Priest have forever been defenders of the faith.”
Tickets for EPITAPH are $10 and can be purchased at the theatre box office or online at clevelandcinemas.com.
Posted by Bob Ignizio at 12:00 AM