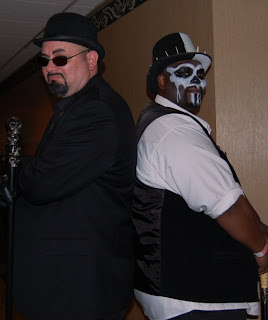 Not long ago I wrote up a regional moviemaking project for one of the few print outlets I have left. Genteel folks indeed they were at this publisher. They had sent a separate news photographer to the rural horse-farm set to cover the digital shoot, and he reported back to the editors, aghast, saying that the whole movie was just "blood and boobs." The bewildered editors relayed that information back to me.

"Well of course it was," I more or less responded. "What else do you think local filmmaking in Ohio amounts to? It's almost always blood...and boobs...and Bigfoot!"

That's a great phrase, "Blood, Boobs and Bigfoot." I really should copyright it before someone else steals it for their own disquisition on Buckeye State cinema-arts culture.

The convention not only brings in celebrity guests, like veteran character actor Robert Z'Dar and makeup f/x experts Robert Kurtzman and Alan Tuskes, it also serves as a networking and facilitation event for anyone who wants to get into local showbiz, either behind-the-scenes or in front of the cameras.

On the schedule this year: the always-popular Scream Queen competition, in which aspiring horror heroines have to deliver the best panic-stricken shrieks; a workshop and contest for soundtrack composition; talks about entertainment law, contracts and copyrights; and, of course marathon of film screenings, ranging from "micro" shorts to features. Filmmakers will be in attendance, and it was not unusual last year for an open audition call to take place at the Clarion.

Expect also to see a lot of young actress-types walking around in skin-tight and skimpy outfits, often with plunging necklines, exposing much of their curvaceous torsos and slender legs. I do believe this reflects the tragedy of Ohio's chronically poor economy; girls just can't afford fabric for full sets of clothing anymore. So they desperately cover their bodies against the brisk May temperatures with whatever undersized spandex and bikini tops and S&M bondage gear they can still scrounge from the church-donation box. Sad, actually. At least that's what I might tell my editors next time, when they see the photos.