Happy People: A Year in the Taiga (May 17th at the Cleveland Museum of Art)

[HAPPY PEOPLE: A YEAR IN THE TAIGA screens Friday May 17th at 7:00 pm at the Cleveland Museum of Art.] 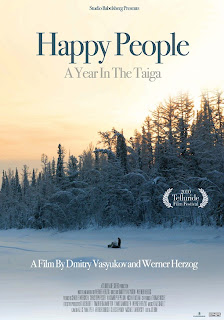 This movie is called HAPPY PEOPLE, huh? Must be about members of the Cleveland media and Seymour Avenue neighbors convinced that since they got on camera a few seconds with international news-crew coverage last week, they're famous and valued to the rest of the world now - so they can punch their ticket out of this town.

No, actually HAPPY PEOPLE: A YEAR IN THE TAIGA is a documentary about a place where, not too long ago in Cold-War culture, the slanderous reputation was that it was a less desirable place to be sentenced than Cleveland: Siberia.

World-class filmmaker Werner Herzog (sharing co-directing credit with Dmitry Vasyukov) narrates a heroic, semi-ethnographic look into the lives of Russian fur trappers from the village of Bakhta, in the "Taiga," or generally unspoiled wilds, of central Siberia. This is no vast, snowy prison-camp gulag, turns out, but it is a hardscrabble existence, far from Russian urban centers and factory towns. In Herzog's interpretation - and consistent with a man-against-nature theme he's done before, famously in GRIZZLY MAN - the Siberian independent fur trappers are "happy people," in the sense of having all they need, as provided by the land and ancient (and, we find, endangered) folk-wisdom woodcraft that have taught them to manufacture everything required.

Over four seasons, mountain-men-like trappers Anatoly Blume, Gennady Soloviev and Mikhail Tarkovsky (yes, Herzog says, an actual blood relative of filmmaker Andrei Tarkovsky), take us through an age-old, carefully maintained calendar of stocking provisions, raising their dogs, repairing cabin-shelters, arming traps, and preparing for months of deep-winter isolation while they harvest mink and sable. Those of you of a sensitive nature, beware brief but intense animal violence, as one mink is mauled to death by a hunting dog. Hopefully that might make some folks in the audience consider their genuine fur and leather-ware purchases. Yeah, sure, what are the chances?

As harsh as this existence may seem, practically MARCH OF THE PENGUINS-like in timed to nature's rhythms and climate, these hardy folk truly dwell in harmony with their untamed environment - at least the hunter-trappers do, even the face of the new free-market economy and that has dropped the commercial value of their sable furs grievously. But they've seemingly got it better than the villagers, listlessly doing wages jobs, who have succumbed to vodka and hardly remember the ways of their ancestors. Every once in a while a boatload of tourists and even a political candidate comes down the river passing by the village, but these are like visitors from another world, easily shrugged off with bemusement by the elders of Bakhta.

The picture comes with a stirring soundtrack by Klaus Badelt - who shares producing credit, along with other names, including Russian's own Spielberg-manque blockbuster director Timur Bekmambetov. Bekmambetov is best known in this capitalist-decadent country, alas for WANTED and ABRAHAM LINCOLN, VAMPIRE HUNTER. One might see his role is as reaffirming that whatever CGI-rendered Hollywood cheese he sells out his proud Slavic name to next, his heart with always be with Mother Russia. Or am I reading too much into that? Meanwhile, with our own peasant classes mostly concerned with who is going to portray Gina, Amanda and Michelle in the inevitable crap-movie version of the Seymour Avenue ordeal, allow me to say that Cleveland's own grueling-survival hot property might remotely have a shot at respectability if Werner Herzog signed on to direct it. Yeah, sure, what are the chances? (3 out of 4 stars)