“Coming first to the Cedar Lee Cinemas in Cleveland Heights” 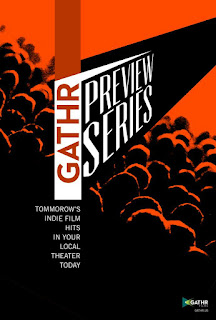 Twenty markets nationwide including Cleveland have been selected by distribution innovator Gathr Films, to hold sneak Preview screenings of first-run films ahead of the studios’ New York and Los Angeles theatrical openings. The membership program will have year-round offerings, with four films or more per month. Gathr Films’ pioneering theatrical on demand model most recently shook up the film distribution landscape with the successful nationwide release of the documentary film GIRL RISING.

"With Gathr Previews, audiences in select cities across the country will have the exciting opportunity to become the trendsetters, previewing films first at premier screenings, even before the New York or Los Angeles openings," notes Scott Glosserman, founder/CEO of Gathr Films, adding, “The Previews Program expands Gathr's mission to kick-start a renaissance of movie-going and allows audiences in these cities to participate in the ‘life story’ of the film at a much earlier stage. And thanks to social media, their voices and opinions can be heard immediately."

Gathr Preview Series Membership Details
Pricing: 1 Month - $19.00, 3 Month - $49.00
Gathr Previews Members are guaranteed a seat for each Preview screening at no other cost beyond their membership fee.
Bringing A Friend??
A limited number of full-price companion tickets for non-Members are held for each screening on a first-come first-serve basis.
For details about membership and upcoming film schedules please go to: https://gathr.us/series/clevelandheights-previews

Beyond the word-of-mouth and buzz-building benefits for distributors of previewing a diverse slate of films in theaters around the country, the biggest beneficiaries of the Gathr Previews program are the movie-goers themselves, who are treated to a “VIP film lovers’ experience,” and cultivated as cultural influencers and taste-makers in their communities.
“Think of it as your year-round film festival, movie club, and mid-week date night all rolled into one. Every week, subscribers can go to their local arthouse and experience a diverse range of comedies, documentaries, dramas and international movies, curated from the major independent distributors' upcoming releases,” states Richard Matson, Head of Distribution for Gathr Films. He explains that the exhibitors were selected on the basis of their already-deep ties to the film-loving communities in their markets, since “they’ve dug in and cultivated these audiences, skillfully curating their programming for years. With Previews, we’re expanding their offerings, rewarding their audiences and are putting the theaters center-stage as cultural influencers.”

The Gathr Previews program, which features such varied cinematic fare as The Iceman (a true crime tale starring Michael Shannon as Mafia hitman Richard Kuklinski and co-starring Winona Ryder) from Millennium Entertainment and What Maisie Knew (a drama based on Henry James’ novel of divorce and dysfunction with Alexander Skarsgård, Julianne Moore and Stephen Coogan) offers audiences the opportunity to purchase tickets to individual screenings or to subscribe to a series of four films. Programming is comprised of first-run films from distributors including Millennium, Kino Lorber Films, Film Movement, Music Box Films, Snag Films, and others.

Gathr Films will support the inventive programming with paid media, social media outreach, publicity and promotions, to be augmented by outreach from the theaters and distributors to their respective databases.

5/1 THE ICEMAN starring Michael Shannon, Winona Ryder and Ray Liotta
5/8 THE DEEP -- an Icelandic documentary/thriller directed by Baltasar Kormakur
5/15 AIN'T IN IT FOR MY HEALTH: A FILM ABOUT LEVON HELM
5/21 WHAT MAISIE KNEW -- starring Julianne Moore and Steve Coogan
5/29 100 BLOODY ACRES -- A horror-comedy
6/5 STUCK IN LOVE -- starring Kristen Bell and Jennifer Connelly
6/12 MORE THAN HONEY -- a documentary about bee colonies
6/18 THE GOOD SON --a documentary about Ray "Boom Boom" Mancini
6/26 BROKEN -- starring Tim Roth and Cillian Murphy
Posted by Bob Ignizio at 2:00 PM