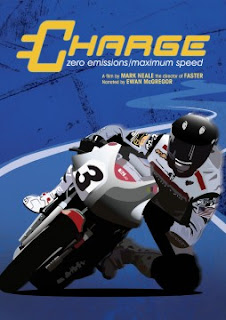 From the director of Faster and Fastest (Mark Neale), and narrated by actor and motorcycle enthusiast Ewan McGregor (Star Wars, Trainspotting), CHARGE is proof that maniacs on motorcycles can be a force for global good.

Every screening begins with the 3-minute short film SOLAR ROADWAYS from GE FOCUS FORWARD and is followed by a pre-taped Q&A with Mr. Neale

CLEVELAND – For the visionaries, this is history. For lovers of gasoline-powered motor bikes it’s blasphemy. What is racing without the sound and fury of internal combustion engines? The documentary CHARGE from filmmaker Mark Neale (Faster, Fastest) – opening in theaters nationwide next week – shows it’s about the future. It's about change. It's about the dream of a clean, green world. It's about the dream of winning. And it’s about enormous risk – both financial and the very lives of the competitors.

CHARGE is proof that maniacs on motorcycles – seeking victory at maximum speed – can be a force for global good. The exhilarating movie, narrated by Ewan McGregor (Star Wars, Trainspotting), follows several teams to the world's first zero-emissions grand prix on the Isle of Man, including Portland, Oregon-based MotoCzysz.

The theatrical release of CHARGE in 15 U.S. markets during the week of May 20 is the fifth film in Cinedigm’s (NASDAQ: CIDM) new DOCURAMA multi-platform film brand and inaugural series of national theatrical screening events (http://www.docuramafest.com). The DOCURAMA film series is attracting national attention for its unique series that is bringing 7 award-winning documentary films in 7 weeks, from April 22 through June 16.

Synopsis: CHARGE captures a pivotal moment in motor sport history: the dawn of the zero-emissions racing era. It came on June 12, 2009, the day of the world’s first zero-emissions motorcycle grand prix. The race took place on the Isle of Man TT course, the most demanding and deadly circuit on the planet. The film begins in early 2009 amid the hectic preparations for the race and concludes over a year later at the 2010 TT Zero. The second race sees a huge leap in performance – proof that racing really does improve the breed and that maniacs on motorcycles can be a force for global good. The film follows the fortunes of several teams in the run-up to the 2009 race and on their return in 2010, 2011 and 2012, from swaggering US hotshots MotoCzysz to shoestring British-Indian contenders Team Agni and local heroes ManTTx Racing.

CHARGE is the dramatic and highly entertaining inside story of an unlikely group of pioneers – obsessed visionaries, ambitious businessmen, new-tech eccentrics, government ministers and hardcore racers – from as far afield as India, the USA, Germany and Britain. It’s a human story as well as a technological one: the teams’ hopes for personal glory and commercial success ride on their green machines. It’s about the dream of a clean, green world. It’s about the dream of winning.

In partnership with GE FOCUS FORWARD-Short Films, Big Ideas, a curatorial program inspired by GE’s vision of innovative people being the catalyst for world change, DOCURAMA will present a 3-minute short documentary with each feature film that has a complementary theme or subject matter. SOLAR ROADWAYS, from filmmaker Michele Ohayon, will be shown before every screening of CHARGE. What if roads and parking lots were solar, fueling enough energy from the sun to power nearby communities as well as electric vehicles? Scott and Julie, the inventors/creators have the answer. Every screening of CHARGE will be followed by a pre-taped Q&A with the director.
Posted by Bob Ignizio at 12:00 AM