Axe Giant: The Wrath of Paul Bunyan (June 1st at the Capitol Theatre) 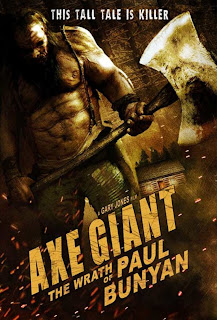 What we have here is your basic “spam in a cabin” movie, as Joe Bob Briggs would say. A bunch of youthful miscreants are given the option of a backwoods bootcamp instead of jailtime for their various misdemeanors, and under the guidance of corrections officer Sergeant Hoke (Thomas Downey) and psychologist Ms. K (Kristina Kopf) they head off into the wilderness. The characters are, of course, all various types, with our main protagonist being CB (Amber Connor), daughter of the local sheriff who got in trouble for driving drunk.

Of course we already know from the flashback prologue (featuring Grizzly Adams himself, Dan Haggerty) that bad things have happened in these woods long before the requisite crazy old coot Meeks (Joe Estevez) warns the hapless city slickers to stay away. Of course they don't listen, and it isn't long before the kids have inadvertently earned the titular wrath of the titular legendary lumberjack. Much CGI bloodshed ensues.

This is pretty much everything you'd want from a “B” movie. Writer/director Gary Jones cut his teeth working with Sam Raimi and his pals, doing special effects on movies like ARMY OF DARKNESS before moving into directing on the Hercules and Xena shows, and he clearly shares their fun sensibility. AXE GIANT is professional without being slick, commercial without being crass about it, and like so many drive-in classics of yore, has a great high concept premise and cool looking monster that are far more memorable than the movie itself. And following the formula devised by the King of the Drive-In himself, Roger Corman, there's also a bit of social commentary, albeit more to the right politically than anything Rog would have done.

There really aren't a lot of mid budget exploitation films like this being made these days. The few remaining drive-in theaters that once were home to these kind of movies now play more or less the same stuff as your local multiplex, so it's nice to see a movie like AXE GIANT get a chance to be seen on the big screen, even if only for one night. Unlike the kind of movies Hollywood considers “low budget” horror flicks, there's still room for some kind of personal touch from the filmmakers that helps make up for some of the rough edges. That's kind of a hard to pin down thing, and probably not that important to the kind of audiences who flock to see a FRIDAY THE 13TH remake, but for some of us, it makes all the difference. 2 1/2 out of 4 stars.
Posted by Bob Ignizio at 12:00 AM