11 Flowers (May 18th and 19th at the Cleveland Cinematheque) 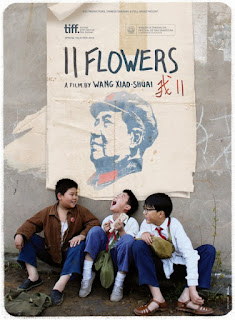 Kids are pretty much the same the world over, remaining largely unaware of the adult world of politics and living by their own set of rules involving pinky swears and double dares. Eventually, though, they reach an age where they start to become more aware of the society and political system they live in. 11 FLOWERS is about Wang Han (Liu Wenqing) reaching that age, which for him is eleven.

The start of Wang's awakening is symbolized by the white shirt he is given by his mother (Yan Ni) to go along with the responsibility of being named gym leader in his class. It's a shirt which he subsequently loses, or more accurately has taken from him, and the ramifications of that loss drive most of the narrative of the film.

The original Chinese title of 11 FLOWERS translates directly as “Me at 11”, making its semi-autobiographical nature more evident. The film is set in China during 1975, the last year of the Cultural Revolution when Wang Han and his friends are still mostly occupied with childish games. After seeing the body of a murder victim, however, their world becomes a little more serious.

Eventually Wang meets the killer, Jueqiang (Wang Ziyi), near a stream where he and his friends are playing. Adolescents always seem to stumble across outlaws living in the woods in the movies, and often that contrivance winds up taking over the film. That isn't the case here. Instead, the meeting is used as a way to open Wang's eyes to the darker realities of life in under an oppressive political regime as Jueqiang recounts what brought him to his present state before moving on.

Perhaps its the fact that 11 FLOWERS is set several decades in the past that allows writer/director Wang Xiaoshuai to make a film so blunt in its depiction of the negative effects of Chinese Communist rule. He's careful not to go too far with his criticisms, but it's definitely clear that for Wang, the Revolution was anything but glorious. No warm and fuzzy STAND BY ME nostalgia trip, this.

11 FLOWERS is a bit slow to get going, and admittedly some of the cultural subtleties escaped me. Sticking with the film ultimately yields rewards, though. Once it gets going, though, 11 FLOWERS is an engrossing coming of age film that shows both the similarities of experience across cultures and political systems, and the differences. 3 out of 4 stars.
Posted by Bob Ignizio at 12:00 AM