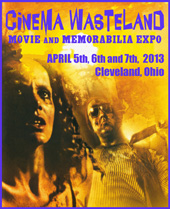 Perhaps, if it is true that Number 23 is returning to make life worth living in northeast Ohio again, the only institution that will resist selling out is Cinema Wasteland (us? Sorry, the Cleveland Movie Blog has already purchased the URL www.lebronjames.gov, in anticipation). This twice-yearly Cinema Wasteland happens in Strongsville in the scrappy spirit of such fan `cons' (conventions) as the Monster Bash in Pittsburgh and DragonCon in Atlanta. Cinema Wasteland is a gathering and memorabilia expo devoted to "the drive-in era" of horror, fantasy and action. It also tends to encompass pro-wrestling, rockabilly, goth fashion and handicrafts, and all other forms of louche "grindhouse" media. Basketball? Maybe if cannibal zombies played it.

Just a few of the cinematic attractions, in two different auditoriums (unspooling on 16mm as well as projected video) at the latest CW include simulated drive-in experience hosted by a guy named Gunga Jim and rubber chicken. The movie is the Spanish science-fiction melange ASSIGNMENT TERROR, in which aliens who evidently learned nothing from Plan 9 resurrect scary monsters like Frankenstein, Dracula and the Mummy to conquer the Earth. Saturday at noon brings a Three Stooges mini-marathon hosted by the Akron-Canton horror host Son of Ghoul.

Hollywood and Off-Hollywood Guests scheduled, in and out of the fantasy-flick genre, include actors Chris Lemmon (JUST BEFORE DAWN), Irene Miracle (Dario Argento's INFERNO), Jamie Rose (who has gone from CHOPPER CHICKS IN ZOMBIETOWN, opposite young Billy Bob Thornton, to a recent multi-part adaptation of Ayn Rand's ATLAS SHRUGGED), Kelli Maroney (NIGHT OF THE COMET), veteran stuntman Gary Kent (a thespian career range from HELL'S ANGELS ON WHEELS to BUBBA HO-TEP) and prolific "scream queen" actress-director-producer-publisher Brinke Stevens (too many credits to list). Plus many others.

Admission at the door is $20 per day, or you can buy at three-day $50 VIP pass. For more info check out the website www.videowasteland.com.


There has lately been talk of LeBron James returning to play for Cleveland. In hopes of sealing the deal, word has come down from City Hall that the city will be renamed LeBronopolis, Ohio. The Cleveland Orchestra will be redubbed the LeBronTones. The Cleveland International Film Festival will undergo a reboot as the Best of LeBron Game Footage. The Cleveland Clinic is to be rebranded as LeBron's Medicine Cabinet. The Rock Hall of Fame and Museum will be the LeBron James Private Record Collection. The Cleveland Police Department will be known as LeBron's Bodyguards & Entourage. The Browns and the Indians will go by LeBron's Warmup Acts.