[THE PLACE BEYOND THE PINES opens in Cleveland on Friday April 12th exclusively at the Cedar Lee Theatre.] 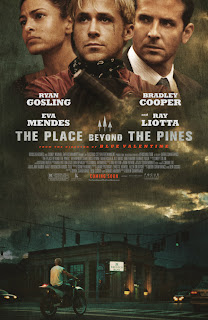 The surprise of Derek Cianfrance's second feature, THE PLACE BEYOND THE PINES, is that it is three films in one. The first section of the triptych, shot in the moody, azure-tinted style of BLUE VALENTINE, centers on Luke (Ryan Gosling), a drifter and stunt motorcyclist who adopts a life of crime to support his baby son. The second, shot in a more traditional style, is a police drama focusing on Avery (Bradley Cooper), a rookie patrolman who has a fateful encounter with Luke. The third, and least successful section, set 15 years later, focuses on the now adolescent sons of the criminal and the cop. Cianfrance, who also co-write the script, has attempted a multi-generational saga, with linked sections reminiscent of Stephen Soderbergh's TRAFFIC (or, less flatteringly, the Wachowskis' CLOUD ATLAS). Ambitious in its sweep and running just under two and a half hours, the film promises greater significance than it delivers. But it is not without stylistic flair and thematic interest.

In the first section, Gosling is a laconic antihero, a man with no background, copious tattoos and cigarette perpetually dangling from his lips. Cianfrance, who also directed Gosling in BLUE VALENTINE, is evidently enamored of Gosling's bleached-blond outlaw image, framing him against a blurred nocturnal background of carnival neon. Luke, a stunt cyclist of legendary reputation, is performing in a Schenectady, NY carnival, where a beautiful ex-girlfriend, Romina (Eva Mendes) approaches him. Through her mom, Luke learns that he is the father of Romina's baby son. Father-son relationships are a central theme of the film; one of the few things we learn about Luke is that his old man wasn't there for him (there's an original theme), so he wants to be there for his kid. Toward that end, he lets a low-life pal talk him into a lucrative new career: robbing banks.

Luke ignores his friend's advice to commit the robberies without violence. Instead, he robs banks maniacally, like Batman's Joker, wearing a Darth Vader helmet and leaping atop the tellers' windows, shouting and threatening employees and customers before making a fast motorcycle getaway. Not surprisingly, his criminal career hits a dead end, happy news for the viewer weary of Sean Bobbitt's excessively stylized cinematography, the heavy, ominous score, and dialogue mixed too low to be intelligible. The poignancy of Luke's fate is muted by the fact that apart from his obvious love for his newly discovered son, Luke is kind of a dick.

In section two, not only is the dialogue more audible, the story is also more interesting. Patrolman Avery is a law-school educated cop, new on the beat, who ends Luke's crime spree in the line of duty. Hailed as a hero, Avery has lingering guilt feelings about Luke's one-year-old son, who's the same age as his own boy. The father-son issue folds in as Avery, who has political ambitions, tries to live up to the expectations of his dad, a retired judge. A straight arrow with a conscience and a Medal of Freedom, Avery becomes privy to police corruption and makes dangerous enemies on the force (one of them played with suitable scariness by Ray Liotta). Shedding the first section's mannered, mumblecore style, Cianfrance displays a sure hand with the police thriller genre; too bad the entire film isn't as solid as this section. Part three introduces Avery's son AJ (Emory Cohen) as Avery is campaigning for state attorney general.  The kid is a mumbling suburban “wigga” whose chief interests are getting high and scoring Ecstasy and Oxy. He preys on classmate Jason (the excellent Dane DeHaan), son of hapless "Moto Bandit" Luke. Would-be thug AJ enlists innocent Jason in his criminal adventures, setting in motion a chain of retributive violence.

The tripartate film doesn't quite cohere, but it does contain strong scenes. It also enables comparisons between Gosling and Cooper, two popular, good-looking leading men, In this cage match, Cooper is the victor. He continues to demonstrate impressive range and sensitivity, and in emotional scenes, he's the cinema's best crier since another Cooper, legendary 1930s child actor Jackie Cooper. 3 out of 4 stars.