The General (April 23rd at the Cedar Lee Theatre)

[THE GENERAL screens Tuesday April 23rd at 7:00 pm at the Cedar Lee Theatre.] 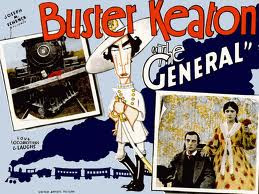 If you really need a break from last week's ghastliness, be it the Brownscapolypse or Cavstastrophe or Boston or tax deadlines, be at the Cedar Lee for a bigscreen revival of a comedy that's so good that it's ranked among film historians as simply one of the greatest comedies ever. Perhaps one of the best films ever made, simple as that.

It's THE GENERAL. No, not a film based on that CGI auto-insurance salesman (and by the way, what's the deal with that General anyway? In what war did he serve? How many people did he kill? How does that qualify him to sell auto insurance exactly?), but rather the 1926 Buster Keaton masterwork, co-directed by Keaton and Clyde Bruckman, but, let's face it, Keaton's show all the way. For those lovers of Hollywood's true Golden Age (yes, hard to believe there was one) who still debate the question of who was better, Keaton or Chaplin, THE GENERAL is Exhibit A for Buster partisans.

THE GENERAL does a comical takeoff on a well-known, true story of the Civil War (later dramatized straight by Disney's live-action THE GREAT LOCOMOTIVE CHASE). Johnnie Gray (Keaton) is a young locomotive engineer in the South at the outbreak of hostilities. Johnnie is devoted to both his sweetheart Annabelle (Marian Mack) and a mighty engine nicknamed `the General.' Johnnie tries repeatedly to join the Confederate Army to fight but is turned down unfairly, which makes him an outcast with Annabelle and her family.

A year later, though, Union spies dressed as Confederates steal the General, kidnapping bystander Annabelle as well. The Yankees intend to tear up strategically important railroad tracks while supplying a Northern invasion. Using a hand-cart and any other transportation available, Johnnie chases after them. With cleverness and some lucky accidents, he gets the General back, while wreaking one-man havoc on the frustrated Union enemy.

After the gauzy soft-focus-and-cypress opening, the film becomes a delightful thrill-a-minute chase adventure, with the running time of an average kid's-Looney Tune cartoon feature (and any modern child viewer who can be persuaded to see this movie on the big screen is to be envied indeed). Keaton's trademark split-second stunts and grace under pressure are in standout form as the beleaguered, underdog hero. It's important to remember that THE GENERAL used no miniature models or CGI. When a train wrecks in a particularly spectacular gag, it's the real thing. Buster Keaton's crew had only one chance to get it right, not like the ones who made UNSTOPPABLE and just had to worry about their hard drives crashing.


Yet THE GENERAL was not a tremendous success when first released, and in some territories in the American South there were public protests that a movie star had dared make a mockery of something so solemn and sacred as the Civil War - never mind that the film is nothing but respectful about the Confederacy and the resolve of Rebel troops. This now-unfashionable slant was pretty much the standard line from old Hollywood, with movie vehicles starring Shirley Temple, Gene Autrey, the Little Rascals and, of course, GONE WITH THE WIND being most generous towards the South, holding to the Lincoln/Johnson line of treating Dixie as kindly as possible (and, of course, recognizing that Southern moviegoers were a major source of box-office income).

Okay, I can imagine Cleveland Heights pretentious intellectuals condemning THE GENERAL for not exposing the crime of slavery (these being the same Cleveland Heights pretentious intellectuals who cry racism whenever anyone suggests Muslims have been known to do bad things, like, I dunno, blow things up). Get past that and enjoy one of the best rides that cinema has ever had to offer. (4 out of 4 stars)
Posted by Charles Cassady Jr. at 12:00 AM