The Future Is Now! (now on video) 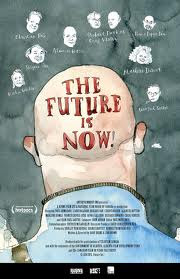 Lately I haven't seen very many movies that give me that classic run-out-on-the-street-grab-perfect-strangers-try-to-tell-them-there's-this-movie-they've-gotta-see feeling. Partially because, yes, that's the sort of behavior that gets you shot these days in America. What other behavior gets you shot in America? Going to movies of course. So why should I even double the risk?

But THE FUTURE IS NOW! did captivate me in that way, though I do wonder if anyone else will feel the same. The few reviews I've read of the Canadian production were disdainful, and my own father couldn't get very enthusiastic about it. So there you are, to each his own. Still, for jaded cineastes who thought they'd seen everything, you've rarely seen anything like THE FUTURE IS NOW!

Odd, because it's a remake, apparently, of a 1947 French movie that I must assume got some attention in its day, LA VIE COMMENCE DEMAIN, a production of which I confess complete ignorance, until Canadian co-directors  Gary Burns and Jim Brown decided to update it. Burns' previous work I do know - WAYDOWNTOWN, an interesting comedy about metropolitan office drones succumbing to their glass-and-steel environment, and RADIANT CITY, a peculiar mix of nonfiction and mockumentary about planned suburban communities and their pathologies.

THE FUTURE IS NOW! also falls into the semi-documentary category. A person-on-the-street TV interviewer (Liane Balaban), who calls herself the Woman of Tomorrow, during a round of interviews about contemporary concerns, fixates on a random guy she dubs the "Man of Today" (Paul Ahmarani). He's a slightly owlish fellow, not unfriendly but quite fixed in his opinions; he defines himself as a "libertarian," but he states flatly he harbors no particular hope or vision for the future, besides his own private pursuit of an ethical life.

The Woman of Tomorrow just can't let this pass. She gets the Man of Today to attend an avant-garde poetry reading, but he just finds it silly and pretentious. At her insistence - and her evidently major influence over time/space itself - the Man of Today agrees to a grander scheme, to embark on a series of face-to-face meetings with international great minds, in the hopes that they will cure his narrow and pessimistic POV. The Man of Today meets and speaks to Japanese architect Shigeru Ban, philosopher Alain de Botton (an especially savvy session about the limitations and absurdities of modern art), NYC novelist Rivka Galchen, Amsterdam painter Marlene Dumas, and evolutionary biologist Richard Dawkins.

What's weird is that while these others are true sit-down dialogue sessions between actor Ahmarani and the esteemed guests, the Dawkins session looks like a press conference (Dawkins announcing breakthroughs in genetic modification; he seems to consider that a good thing) into which Ahmarani was inserted after the fact. But another bit tops even that: the Man of Today enjoying an encounter with a chainsmoking, hologram-like Jean-Paul Sartre, "Special Guest Philosopher." Sartre is, in fact, archival footgage edited in from the original LA VIE COMMENCE DEMAIN. And the Man of Today, like any good Canadian, is fluently bilingual in French, so he and Sartre hit it right off.

There are some other cute moments, as the Man of Today argues about the toxic effects of consumerism with a glamor model's image on a video billboard, and exposes a children's puppet show as indoctrination into the free-market theories of Milton Friedman. THE FUTURE IS NOW! falls into a microgenre of precious few brainy movies - the book adaptations MINDWALK and SOPHIE'S WORLD, for example (yeah, hands up if you saw 'em) that invoke Big Ideas and lofty concepts within the framework of a scripted narrative that is a series of Platonic dialogues and Socratic debates. No high-speed hovercraft chases, no aliens or vampires to defeat, no music-video production numbers, no token romance - well, almost none, as there's a hint [SPOILER ALERT] that the lucky Man of Today and the Woman of Tomorrow could be an item by the finale. But you get my point: this picture is almost purely an intellectual tour and feast.

And, while it did not exactly melt my own deep cynicism about things, I did find this offbeat feature a charming and unconventional argument for optimism, one not chained to conventional Syd Field three-act structures or formulas of drama. And, unlike, I suppose, that ANCHORMAN sequel that most of the folks at San Diego Comic-Con are looking forward to, it's a movie actually ABOUT something (many things, actually). Give it a chance. Maybe you won't like THE FUTURE IS NOW! as much as I did, but you must admit it's certainly different. (3 1/4 out of 4 stars)
Posted by Charles Cassady Jr. at 12:17 AM