[THE ANGEL'S SHARE opens in Cleveland on Friday April 26th exclusively at the Cedar Lee Theatre.] 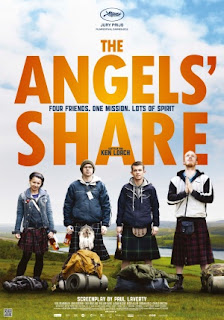 The setup for Ken Loach's new film THE ANGEL'S SHARE is very much like one of those eighties comedies where a group of misfits with little in common aside from their outsider/loser status get thrown together in an unfamiliar situation rife with comic potential where they must ultimately prove themselves. Think STRIPES (or SUMMER SCHOOL or POLICE ACADEMY or MOVING VIOLATIONS... you get the idea) for the arthouse crowd.

In this case, the misfits are all petty criminals and troublemakers of one kind or another who manage to avoid jail time by doing community service. In the movies, a group like this needs a Bill Murray type to act as defacto leader. Here that role is filled by Robbie (Paul Brannigan), a young man with a history of violence who is facing an assault charge when we meet him . Even though Robbie was attacked first, his response was so violent and extreme as to go beyond the legal definition of self defense.

The only thing that saves Robbie from a harsh prison sentence is the fact that since his last release from prison nearly a year ago, he's managed to stay out of trouble. That's do in no small part to the fact that his girlfriend Leonie (Siobhan Reilly) is pregnant with their child. Knowing he's about to be a father, Robbie has decided to make a genuine effort to leave behind his violent ways and lead a decent life. Only problem is, old family enemies and Leonie's family aren't making that easy.

Robbie finally gets a break courtesy of Harry (John Henshaw), the man who oversees the community service projects he and the other misfits have been assigned to. Harry takes a liking to Robbie, and eventually introduces him to his hobby of whisky tasting. As it turns out, Robbie is a natural, having a highly developed sense of smell and taste enabling him to detect all the various subtle flavor variations to be found in a glass of high-end hooch.

At this point in THE ANGEL'S SHARE, there still appears the possibility that it might go down a more serious road, particularly when Robbie meets with a prior victim and his family and has to really face up to the fact that he's been a pretty awful human being up to this point. But then the film takes a turn into wacky caper territory, with Robbie and his band of lovable losers coming up with a scheme to make some quick cash and leave their old lives behind. The deeper issues aren't dropped completely, but they definitely take a back seat to the mechanics of the crime.

As the film ultimately goes for a lighter approach than it might have, it still has much to offer in the richness of its characters and attention to detail. And though Robbie isn't the easiest guy to root for at first, but by the end you're pulling for him – even if trying to escape one's criminal past by committing another (at least less violent) crime is somewhat morally ambiguous, to say the least. Along the way there's a little bit of drama, a little bit of pathos, and plenty of laughs. 3 out of 4 stars.