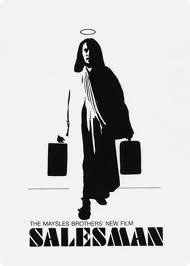 The Badger, the Rabbit, the Bull, the Gipper - all nicknames for a handful of pretty cynical Bible salesmen in a classic cinema verite documentary feature that helped make the reputation of the brothers David and Albert Maysles as standout nonfiction filmmakers.

SALESMAN is about the elusive American dream. The four salesmen - Paul Brennan, James Baker and Raymond Martos - trudge through some pretty oddball, largely Catholic neighborhoods in Boston and Florida, trying to convince low-income laity to purchase their deluxe copies of the Gospels at $40 apiece (back in the mid-1960s era a considerable amount, even for Salvation). Their potential customers are wan-looking wives and mothers at home all day with the kids, while the menfolk work, which also seems to speak volumes about spiritual desolation and old-school domesticity (of course, today the economy is so bad both mothers AND fathers have to work themselves to death in two or three jobs apiece and still lose the house, and everyone's happy, right?).

The salesmen are all Irish-Catholic Bostonians, but they do some pretty demeaning impersonations of drunken-Paddy stereotypes to take the pressure off the fact that one of them is going to get sacked if he doesn't make his sales quota of the Lord's Word for the Mid-American Bible Company (Cassady's Note To Self: "find out if Mid-American Bible Company is still in business, ask if they are hiring"). James Baker is married to a non-Catholic; one of the desperate guys tries to sell a Bible to him in order to convert her.

Albert Maysles has said that as he and his brother had grown up Jewish among hostile Irish-Catholic kids, this film represented a sort of reconciliation for all the bullying they endured, and the stricken Paul Brennan, whose closeup ends the movie, wound up a lifelong friend.

American Public Television turned down broadcasting SALESMAN, reported Maysles, because the executive who screened the feature was too depressed by it - his father had been a salesman. Albert Maysles has called SALESMAN the first "real" feature nonfiction film and compared it in that sense to the first recognized "nonfiction novel," Truman Capote's In Cold Blood.

The Maysles brothers ended up renting theaters themselves to show it ("four-walling"), and one screening had a particularly happy outcome; Albert Maysles met an especially impressed audience member whom he soon married. We can't guarantee you will luck out like that at the Cinematheque's revival of SALESMAN, but there will be an appearance by film scholar-author and onetime Cinematheque volunteer J.M. Tyree, who has written extensively about SALESMAN, as well as doing a whole book devoted to THE BIG LEBOWSKI. Tyree will be at this particular screening for a Q&A.

He will also have copies of his own books for sale and signing. Wouldn't it be great if the whole audience shows no interest in his books, but asks if he's got any Bibles available? Someone bring a camera, try to get footage if that happens. (4 out of 4 stars)
Posted by Charles Cassady Jr. at 12:01 AM