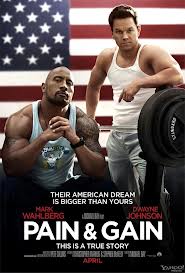 PAIN & GAIN tells the more or less true story of how a group of bodybuilders in Miami, Florida who decided to embark on a kidnapping and extortion spree in the mid 1990s. Daniel Lugo (Mark Wahlberg) is arguably the brains of the group, a guy who feels he's owed a bigger slice of the American Dream and isn't above breaking the law to get it.

Inspired to become a “doer” by “Johnny Wu” (an obvious stand-in for infomercial king Tom Vu), Daniel comes up with a get rich quick scheme: He'll kidnap Jewish/Colubian deli magnate Victor Kershaw (Tony Shaloub), one of his clients at the Sun Gym, and get him to sign over everything he's got. To aid in his plot, Daniel drafts fellow bodybuilders Adrian Doorbal (Anthony Mackie), who works part time at a taco stand and has “performance” issues due to his steroid use, and Paul Doyle (Dwayne Johnson), an ex-con, ex-cocaine addict turned born-again-Christian who somehow manages to rationalize his crimes as being okay with the Lord.

Lugo's plan, if it had been executed properly, might actually have worked. The problem for Lugo was that he and his fellow criminals were all incompetent morons. It takes multiple botched attempts before they finally abduct Kershaw, and even that marginal success is quickly followed by one mistake after the other as the muscle-bound miscreants keep digging themselves a deeper and deeper hole. That's about as far into the story as I want to go for the sake of those looking to avoid spoilers, but suffice it to say things get both grislier and more ridiculous as time goes on, eventually prompting the involvement of private detective Ed Du Bois (Ed Harris).

With a budget of a mere $25 million, PAIN & GAIN is practically an indie film by producer/director Michael Bay's standards. This is closer to something like Richard Linklatter's dark true-crime comedy BERNIE than the action fare Bay is generally known for. Of course the story Bay chose to dramatize has considerably more strippers, car chases, and explosions in it than Linklatter's film, but still, by his standards this is pretty low key fare. At times, I think Bay may even have been poking a little fun at himself, as in the trademark scene where his stars walk casually away from an explosion. Then again maybe we've just seen Bay recycle that shot so many times that we can't help but laugh at it. Either way, there are plenty of other genuine laughs to be found.

Of course, this being based on actual events in which actual people died, the idea of playing the scenario for laughs may be a bit problematic for some. Also problematic is the way that both the kidnappers and their victims are treated with a sort of moral equivalency by the film. Both Kershaw and a later abductee are portrayed as unlikeable and borderline criminal to the point that it feels like we're not supposed to emotionally invest in them too much. At the same time, the bad guys are such a hoot that we kind of like them. That could be played for subversive ends, but this isn't that kind of film. It just wants to entertain its audience without making them too uncomfortable, even if maybe they should be squirming a bit.

It's also a bit disingenuous of the film to keep hammering home the point that “this is a true story”. Not “inspired by a true story”, not “based on a true story”, but “this IS a true story.” And we are told this not just at the beginning, but at other points in the film. It's enough to make you understand how Bill Clinton could as for a definition of the word “is”, if people are going to use it so casually. Having been suitably intrigued by the film to read the articles it was based on (feel free to do so as well here), I can say the film definitely oversells its authenticity. A lot of the more jaw dropping moments are indeed factual, but there are a lot of omissions and alterations.

All that said, had this been a complete work of fiction I would have no hesitation in saying I quite enjoyed it. And given that I've seen more than enough Hollywood “true stories” to know better, it still doesn't bother me all that much. If nothing else it's worth it for the performances (especially Johnson, who gets a rare chance to remind us that he actually is a really good comedic actor, and Shalhoub, who pretty much kills it in everything he's in). It doesn't happen often, but I'm going to have to admit that I liked a Michael Bay movie. 3 out of 4 stars.