Harvest of Empire: The Untold Story of Latinos in America (recently screened at the Cleveland International Film Festival) 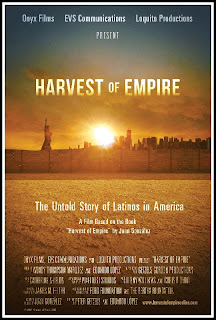 Ever wondered why someone would leave their home and their family to travel hundreds of miles by foot and by bus, hopping freight trains, risking robbery and assaults along the way, then traversing barren deserts with temperatures frequently over 100 degrees Fahrenheit only to possibly die of dehydration or gunshot wounds as they cross the U.S. border? If you listen to the constant cacophony of TV pundits belching their vitriolic claptrap, you might think they are coming here to steal menial jobs from salt of the earth "Americans" and to trill their Rs with contempt all over the English language. It turns out, though, that their motivations are quite varied and different, and that the problem with the American Dream that bewitches our citizens and immigrants alike, is that it is propped up by economic asymmetries created by corporate globalization and backed by the U.S. government. HARVEST OF EMPIRE, eponymously titled after the book by Juan Gonzalez, endeavors not only to give snapshots of seven countries long affected by U.S. policy, but also to humanize the displaced peoples that too often exist in the collective imagination as pitiable abstractions somehow less entitled to prosper than our nation's native born.

For a country that has 5% of the global population, the U.S. uses a disproportionate amount of resources, including 22% of the world's oil and 40% of total meat consumption. Our lifestyles in large part depend upon the deprivation of others, given that if everyone in the world consumed as much as the average American, we would need 4.1 earths to sustain the current population. The need to maintain such obvious inequality is inextricable from the American Way of Life, which makes it easy to imagine anti-immigration hardliners suffering what Eduardo Galeano described as "nightmares about millions of children advancing like locusts over the horizon from the Third World."

However, HARVEST OF EMPIRE is much more gentle than Galeano's literary works in how it makes its points (and also more succinct than this review). Directors Peter Getzels and Eduardo López take pains to not castigate the everyday people of the United States as the film delves into historical contexts rarely acknowledged during the ongoing immigration debate. As infuriating as U.S. interventions in Latin America have been, the film still lauds the the sense of justice and basic humanity of our people while expressing outrage over the continued exploitation and violence done in our name. I imagine that this ambivalence likely echoes the dissonant feelings experienced by millions of Latin American immigrants who have made their homes here.

What is staggering is just how far back U.S. intervention in Latin America goes, and how it persists to this day. The film chronicles such things as the U.S. occupation of the Dominican Republic during the Wilson Administration followed by the much more egregious and longstanding support of one of history's most heinous dictators, Rafael Trujillo, who during 30 years of U.S. backed oppression became one of the wealthiest men in the world while his people suffered poverty, torture, and violent oppression. The situation was worse for ethnic Haitians, who during one five-day genocidal purge, an estimated 20,000 were killed.

A bit later in Guatemala, land reforms and the improved literacy achieved by the democratically elected Jacobo Árbenz Guzmán were halted in a CIA-backed coup fueled by Cold War paranoia, along with the more rational fear of democratic socialism leading to self-determination and a de-stratified society. For decades of civil war, the U.S. intensively aided government forces, even providing training for the infamous death squads at the School of the Americas in Fort Benning, Georgia, who then went on to commit genocide and torture against the indigenous peoples of their country.

Nicaragua at least made headlines in the U.S. when it was discovered that the Reagan Administration was illegally selling arms to Iran in order to covertly fund the Contras in Nicaragua. The Contras in their opposition to the Sandinista government had formerly received open U.S. funding before a congressional ban, and afterward remained a strategic ally of Reagan despite well-documented human rights violations including mass killings, rapes, mutilations, and abductions. And although it is impossible to rank the copious atrocities, the Massacre at Mozote in El Salvador would have to be near the top. Details about the slaughter of approximately1,000 civilians that day in 1981 are too repulsive to recount, but it is notable that the U.S. provided arms, funding, and training to those who committed these acts - both before and after the massacre - with Reagan denying that the event even occurred so that Congress would continue funding the suppression of leftist guerillas. These same death squads, operating as part of the Salvadoran military that received U.S. aid, were responsible for the extrajudicial slayings of thousands, including the assassination of Archbishop Oscar Romero during mass, as well as the gang rape and murder of three U.S. nuns during the 13 years of civil war.

But to only examine the most outright horrendous abuses and crimes ignores the deep systemic problem of inequitable trade relations, which also have onerous, lasting effects. The film includes the well-known example of the United Fruit Company, a U.S. company who relied on servile dictatorships that came to be known as "banana republics" in order to maintain market dominance and prevent even small farmers from owning land and competing. The corrupt DNA of the United Fruit Company now resides in the corporate genome of Chiquita Brands International, who as recently as 2007 has been accused of workers' rights violations and in the same year was fined $25 million for payments made to Colombian groups considered to be terrorist organizations by the U.S. State Department.

And then there is the contentious example of the North American Free Trade Agreement (NAFTA), which among other things, opened the Mexican market to U.S. corn made artificially cheap by heavy subsidies. This of course drove down the price of corn until Mexican farmers could not compete in their own domestic markets. As you may well imagine by now, this becomes yet another factor driving immigration. Additionally, this is probably also a factor in keeping the labor supply high and wage costs low for foreign-held firms operating maquiladoras, manufacturing and assembly plants located in Free Trade Zones sheltered from tariffs and customs regulations.

Up to this point, you might have the impression that this film is an overwhelming deluge of history, atrocity, and exploitation, but HARVEST OF EMPIRE also shows the positive aspects of Latin culture and the many contributions made by those who may have arrived in this country illegally. Just as the filmmakers highlight the personal stories of those with direct experience of the aforementioned history, they also show the contributions made by those unable to enter legally, ranging from literary arts to brain surgery, thereby addressing the false idea that undocumented immigrants add no value to our society.

Furthermore, I scratch my head when I think of the purported free-market devotees worshiping the Invisible Hand with libertarian zeal, yet are deeply afraid of the competition that emigrating campesinos pose to high school dropouts, let alone the immigrants who leverage luck and determination to achieve much higher social mobility. It seems to me that the market rate for wages, which illegal immigration admittedly drives down, depends upon maintaining inequalities among labor markets: our higher domestic wages are the result of distorting labor markets by shutting out segments of the global population. At the same time we pursue unilateral trade agreements in collusion with an elite class of foreign despots and corrupt regimes, which allow transnational corporations to not only abscond with mineral wealth of nations, but also the fruits of their hard labor. Our economy runs, in part, by preserving the low wages and lack of consumer buying power elsewhere. Then we try to shield ourselves from the deluge of desperate masses seeking even a humble living within the boundaries of a nation grown plump on riches extracted from their lands. In this light, defending the Mexican border begins to look a lot like just one of the many ways we defend U.S. privilege at the expense of people elsewhere.

Sadly, most of us are scarcely aware of the actions taken for our benefit by businesses that we patronize as well as our government that supports them. HARVEST OF EMPIRE strives to change that with a balanced approach that manages to be highly informative yet not too didactic, emotional without completely draining the viewer, and deeply critical of U.S. policy without vilifying a nation of people.   Highly recommended.  4 out of 4 stars.
Posted by Ben at 12:30 AM