[The following is a guest post by blogger Kim Yanoshik. Kim lives in Lakewood, and in addition to being a film fanatic is also an incurable shutterbug. She shares some of her photos on her blog Lakewood Daily Snap.]

Last week the Cleveland Movie Blog's main man, Bob Ignizio, contacted me and asked if I would share some of my experiences and favorite films from this year's 37th Cleveland International Film Festival.   Maybe I was infected with film fever or perhaps I was simply feeling foolish, but I told Bob yes, I'd be honored to write a guest post.

For me, as for many Clevelanders, The Cleveland International Film Festival (CIFF) is one of the best things about living here on the north coast.  This year I was able to take a vacation from real life and go on a stay-cation and embrace my reel life.

Reel life entails sitting in the dark, visiting dozens of countries, and experiencing the entire gamut of human emotions from sorrow to joy thanks to the talents and magic of the world's filmmakers. In addition to the films, the truly marvelous thing about reel life is being part of the spontaneous community which emerges at CIFF.

Each year the CIFF grows and sets new records.  Similar to the festival, I too seem to break records from year to year - whether it is a record for the number of films seen or in the growing number of familiar faces and what I call my "reel" friends.  Reel friends are folks seen only during the festival or in rare serendipitous encounters outside of the festival.  Because of  our shared love of film, reel friends are the same as real friends - for when you meet up with a reel friend there is an ease of conversation that is at both comforting and joyful - even if one disagrees about the merits of a particular film.

This year's festival showed a total of 180 features and 164 shorts from 65 different countries; over the course of eleven days, I saw a total of 47 feature films and 6 short films from 25 different countries.   To those who don't take a festival long vacation, the number of films I saw may seem staggering.  For those of us who put real life on hold, my number is probably pretty average.

Of  the feature films I saw, 26 were narratives and 21 were documentaries.  Although I love short films, I don't go to many short films during the festival.  I have been very privileged that for the last several years I've been on the festival's selection committee.  From September through January members of the CIFF selection committee watch scores films. The committee is broken up into three groups - narratives, documentaries and shorts.  I am in the groups that watches primarily shorts.  Of course,  most of the films I see don't make the cut after: all, hundreds, if not thousands, of films are submitted to the festival each year for consideration.

I don't know if I was lucky or if the quality of the films is better, but none of the films I chose to see this year were losers.  Now don't get me wrong, this is not to say that I've seen lots of losers in past years, but I do recall several films over the years which gave me pause in terms of their overall attributes and had me wondering how they made it into the festival.

It is almost impossible to chose one favorite film from the festival as there are so many genres and so many other variables about a film which can distinguishes it from the flock.  For film, as with other art forms, "beauty" is in the eye of the beholder. When we watch a film we each bring our own history and our own sensibilities into our evaluation of a film.  That said, I'd like to share my short list of favorite films - I have chosen three narrative films and three favorite documentary films. 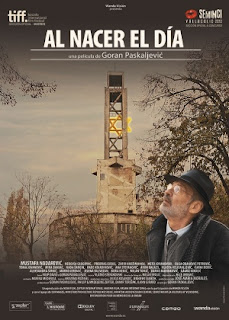 WHEN DAY BREAKS – listed as from Serbia, Croatia and France, this film tells the moving story of a Misha Brankov, a retired music professor who discovers his Jewish heritage when a small metal box is unearthed during a excavation project on the grounds where many of the city's poor and dispossessed currently live. The site was first home to the Belgrade's fairgrounds and then was later used by the Nazi's as a concentration camp where thousands of Jews and Gypsies were killed. The box contains a photograph of Misha when he was two years old with his birth parents, a letter to him from parents, and an unfinished musical score entitled "When Day Breaks" written by his father.   The film poignantly portrays Misha's journey as he accepts and understands his origins and sets out to finish and perform his father's unfinished composition. An intense and powerful film.

KUMA – Another intense and powerful drama, this Austrian film is a compelling and compassionate drama that concerns a large and complex Turkish family living in Vienna. From the opening scene of a wedding in a small rural village in Turkey to the film's final scene in an apartment in cosmopolitan Vienna this at times claustrophobic domestic drama dishes up one twist after another. The title of the film, kuma, comes from the Turkish term for second wife, a position which applies to Ayse, one of the films principal characters and is the film's first big surprise or twist.

KEY OF LIFE – This film is a hilarious black comedy from Japan about identity mistaken, lost, found and ultimately created.  The story centers around two men: the suave, obsessive-compulsive Kondo, who it turns out receives large sums of money by "getting rid of people," and Sakurai, a desperate and depressed 35 year old actor who is so unlucky he can't even successfully commit suicide.   Sakurai works up such a sweat after his botched attempt to hang himself he decides to spend the few yen he has by going to the local bath house.  Meanwhile, despite his precautions on a job, Kondo notices a small spot of blood on his wrist and on the wristband of his watch, near the bath house Kondo stops to clean up. After undressing, storing his possessions, and putting a band with the locker key on his wrist, Kondo slips on a bar of soap and hits his head. Kondo's slip is so dramatic that the wristband with his locker key goes flying off and lands far from his unconscious body.  Sakurai, who noticed the huge wad or cash in Kondo's wallet,  views Kondo's misfortune as his lucky break. Before the unconscious man is hauled off to the hospital, Sakurai switches his locker key with Kondo's. What ensues next is a madcap romp with a story so quirky, charming and amusing that it is downright criminal. 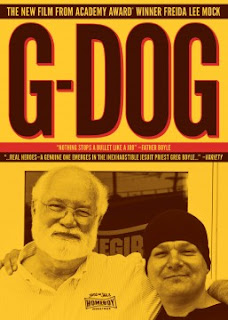 G-DOG – This is an inspiring film about Greg Boyle, a visionary Jesuit priest who has devoted his life to improving the lives and opportunities of East L.A. gangbangers.  Father Boyle, who is also called G-Dog, Father Greg or Father G, created Homeboys Industries built on Father Greg's motto: "Nothing stops a bullet like a job," and on the foundation of love.

ELEMENTAL - This documentary by filmmakers Gayatri Roshan and Emmanuel Vaugh-Lee focuses on three incredible individuals in different parts of the world who are trying to save our planet: Jay Harmon, an Australian scientist and innovator, Eriel Deranger, a first nation activist, and Rajendra Singh, an Indian governmental official.   Harmon's quest is to create technologies which can stop global warming, and it seems he is very close to making significant progress by incorporating lessons from nature itself.  Deranger is working tirelessly to save her people and her people's land (not to mention the planet) from the destructive effects of mining the Tar Sands and the world's largest industrial development and pipeline project.  Singh is making tremendous inroads into saving the Ganges River - revered by the Indian people as "Mother Ganga" the river faces extinction due to unregulated industries, dams, and misuse and abuse by people living near its banks.  The film is visually breathtaking with its seamless, accessible and inspiring storytelling this film can be a valuable tool as we try to solve our planet's ecological problems.

DIGITAL DHARMA: ONE MAN'S MISSION TO SAVE A CULTURE – From U.S. filmmaker Dafna Yachin, this film shares Gene Smith's epic 50- year journey to find, preserve and digitize more than 20,000 volumes of ancient Tibetan manuscripts.  Born in Utah to a Mormon family, Smith seems like an unlikely candidate to devote his life to preserving Tibetan culture.  However, even as a child Smith had a passion and talent for studying and learning languages. As he grew older the more obscure the language the better, while studying Tibetan and Sanskrit at the University of Washington during the late 1950s, Smith was enlisted to help acculturate a family of Tibetan refugees to life in the United States.  The head of the family was Deshung Rinpoche, one of the most learned lamas to escape Tibet.  During the years Smith helped the family, he learned more than he taught and the experience set the course for his amazing journey of finding and collecting the endangered Tibetan texts which span a 1,500 year old literary tradition.  The film visits many of the places Smith lived and visited during the course of his remarkable career - including Tibet, Bhutan, China, Indonesia, Nepal. Furthermore interviews with Smith and along with a wide assortment of family, friends, colleagues, lamas, and others present a full portrait of a remarkable man.  A visually beautiful film which is scholarly, accessible and inspiring.