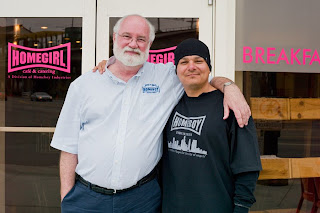 Profile of Father Greg Boyle, founder of Homeboy Industries in East Los Angeles and author of “Tattoos of the Heart,” is a story about second chances; Every screening begins with a 3-minute short film from GE FOCUS FORWARD and is followed by a pre-taped Q&A with Ms. Mock

With a motto of “Jobs not Jails” Father Greg built this successful non-profit institution in Los Angeles from scratch. Today, though it faces enormous financial challenges each month, Homeboy Industries and its thriving Homegirl Café offer not only a refuge but a life-changing environment that puts these young people on a new path in life. And it has become a global model for turning kids away from gang life and toward a future of hope.

G-DOG was voted one of the Audience Favorites in the People’s Choice Awards at its World Premiere at Toronto’s Hot Docs International Festival, the Aspen Film Festival, and the San Luis Obispo International Film Festival. The film had its U.S. premiere at the Los Angeles Film Festival. G-DOG was selected by the US State Department as one of 25 films for its American Film Showcase this year to tour US Embassies around the world for cultural diplomacy.

In partnership with GE FOCUS FORWARD-Short Films, Big Ideas, a curatorial program inspired by GE’s vision of innovative people being the catalyst for world change, DOCURAMA will present a 3-minute short documentary with each feature film that has a complementary theme or subject matter. Panmela Castro, by filmmaker Heloisa Passos, will be shown before every screening of G-DOG. Born and raised in the outskirts of Rio de Janeiro, Brazil, Pamela is the president of Nami Network, a feminist organization that promotes women's rights through graffiti-art. Every screening of G-DOG will be followed by a pre-taped Q&A with the director.
Posted by Bob Ignizio at 12:00 AM