Cleveland's Screaming! (now available to stream or for digital download) 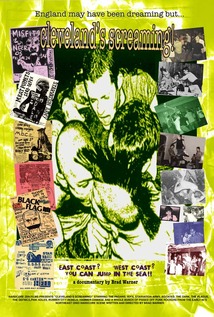 The 2006 documentary AMERICAN HARDCORE did a pretty good job documenting the beginnings of hardcore punk in the early eighties. But having cast a (nation)wide net and working within the expected time constraints of a feature film, it was a given that not everything one might have wanted to see in such a film could make the final cut. For instance, pretty much the entirety of the Akron/Cleveland hardcore scene.

Thankfully for fans of the North Coast underground music scene, Brad Warner (bass player for early 80s Akron hardcore band 0DFX and author of several books including Hardcore Zen) has righted that wrong with a documentary of his own called CLEVELAND'S SCREAMING! As is typical in such films, Warner blends archival footage of the bands he's covering in their heyday with modern interviews with the musicians. We get to see early raw footage of bands like The Dark, 0DFX, The Offbeats, The Pink Holes, Starvation Army, The Agitated, and more. Interview subjects include not just the band members, but some of the fans, as well.

CLEVELAND'S SCREAMING doesn't take a straight chronological path in telling its story, opting instead for an “oral history” format that allows its subjects to share interesting stories and anecdotes without necessarily worrying if everything flows exactly from point 'A' to point 'B'. The result is a more relaxed, conversational film that gives a good sense of what the scene was like without feeling like a dry history lesson.

One of the most frequently recurring themes in the interviews is how dangerous and out of the norm being part of this scene was at the time. A kid sporting a mohawk today doesn't raise many eyebrows, but in the early eighties a hairstyle like that could get your ass kicked. And while punk rock (or a corporate facsimile thereof) can be heard on mainstream radio stations today, back then the audience for this kind of music pretty much consisted of the members of the other bands, and maybe the “Munchkin” girls (don't ask, just watch the movie).

Given the vintage of much of the archival footage, some of it looks and sounds a bit rough at the time. But remember, this was the early eighties before everyone had a HD video camera in their phone. As for the interviews and overall editing and assembly of the film, it's simple but professional, with no cutesy graphics or animation. And that's as it should be. This is a movie about punk rock at its most raw and belligerent; it's not supposed to be pretty. You can rent the movie to stream on your computer for or buy a digital download here. https://distrify.com/films/5915-cleveland-s-screaming 3 out of 4 stars.
Posted by Bob Ignizio at 12:01 AM