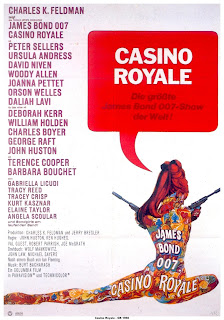 Unless their schedule is seriously in error (and it does happen, damn college students), the Case Western-Reserve University Film Society is pairing the campus showing of the latest James Bond masterpiece, 2012's SKYFALL, this weekend, with a revival of CASINO ROYALE - no, not the critically overpraised 2006 CASINO ROYALE that relaunched the franchise, with Daniel Craig as a tough, realistic Bond, true to the hardboiled prose of Ian Fleming. The CWRU crowd have instead (I hope) impishly programmed the CASINO ROYALE from 1967 - a daffy spoof serious Bond buffs would wish could disappear, like Lucasfans hope could happen to Jar Jar Binks. No kidding, this notorious camp makes the Roger Moore MOONRAKER look like TINKER TAILOR SOLDIER SPY.

One has to understand the context. The 1967 CASINO ROYALE was concocted at a height of psychedelic sixties spies-a-go-go mania, nurtured by the first handful of Sean Connery 007 movies, yes, but aided/abetted by TV's Man From U.N.C.L.E., countless Italian Bond ripoffs (they've filled entire vaults, I swear), and Hollywood competitors and parodies from the ridiculous (A MAN CALLED FLINTSTONE; remember Fred Flintstone's movie debut was a Bond spoof?) to the halfway decent (some of the Dean Martin/Matt Helm comedies, both of the James Coburn/Derek Flint capers). And there were Bond riffs in comics, toys, advertising, men's products, and just about every form of creative expression except possibly opera, ballet and Broadway. And I say that just because I don't know enough about opera, ballet and Broadway.

Oh, and very possibly, everyone was high on drugs (except me; I was only 4, and even then, cool kids shunned me). In that goofy spies-and-hippies aesthete - from which AUSTIN POWERS: INTERNATIONAL MAN OF MYSTERY drew much inspiration - Columbia Pictures took advantage of a legality entitling them to film the very first Ian Fleming novel, 1952's Casino Royale. They determined to shoot their wad with wretched excess, via the most expensive, most way-out, ultra-groovy, op-art/pop-art Bond Movie To End All Bond Movies. Which it didn't, of course, although a few careers stopped dead in their tracks, I think.

Those who get to watch this mod-era CASINO ROYALE on the big screen might imagine later they dreamed it. The plot: The entire James Bond family, it seems, is made of spies, but they've been disappearing with the advent of a supervillain terror organization called S.M.E.R.S.H. The British government, in desperation, turns to the original, real Sir James Bond, who is retired (and played by David Niven - an interesting in-joke; Niven in much younger days was Ian Fleming's ideal actor to embody Bond). This aging, somewhat quarrelsome Bond - who dismisses the Sean Connery Bond as an imposter and "sex-maniac" - has a weird, overlong interlude with a castle-full of kilt-wearing Scotsman and Deborah Kerr - what turns out to be a S.M.E.R.S.H. attempt to assassinate him.

Sir James decides the best way to baffle the enemy is creating and renaming as many operatives as possible as `James Bond.' One of the recruits is Sir James' own long-lost dancing-girl daughter Mata Bond (Joanna Pettet), partially named for her mother, legendary Mata Hari. Another unlikely `James Bond' is Evelyn Trimble (Peter Sellers), a nerdish card-playing expert. He gets a crash course in being a suave secret agent, then is enticed by sexy, submarine-going Vesper Lynde (Ursula Andress) to win a high-stakes gambling match against Le Chiffre (Orson Welles), a S.M.E.R.S.H. underboss, in a casino far more lavish than the Horseshoe in downtown Cleveland, I have to tell you all. This sequence is just about the only bit that's a holdover from the source novel.

In the finale, prophetic of Mel Brooks' BLAZING SADDLES (and/or Rowan & Martin's Laugh-In), the plot totally disintegrates, with cowboys and Indians (the latter descending via teepee-shaped parachutes), performing seals and chimps,  Frankenstein's monster, a flying saucer, a mind-torture device generating an army of marching Scottish pipers, and gag cameos by George Raft and Jean-Paul Belmondo (look them up on Wikipedia). Oh yes, a young Woody Allen - known best at the time for stand-up comedy - is one of the Bonds, with a nude Israeli beauty queen strapped to a table. Like I say, you'll think you dreamed it.

How this all happened was later described by British director Val Guest. Five famous/trendy directors (including John Huston) got hired, each to shoot a different bit of the story in sequence, then passed the results along the ever-changing script to the next one in line, like a high-stakes game of Post Office. Hey, it was the 1960s; the Vietnam War was waged along much the same lines. Moreover, hasty rewrites had to accommodate that temperamental co-star Sellers walked away - reportedly not so much out of understandable artistic frustration, but because the Royal Family visited the set and paid more attention to Orson Welles than to him (it is another weird allegation that Sellers sought to play his role fairly straight, and vainly hoped this would be his career breakout as a dashing romantic idol).

Ultimately, Val Guest was handed practically incomprehensible celluloid and ordered to hammer some sense and continuity into it. If so, he probably should have gotten a knighthood for what little headway he managed to make. Made for $12 million (astounding for the time), CASINO ROYALE wasn't really a box-office disaster at the time - but it sorta looks like you'd imagine it would be. And, for those keeping score, it was outgrossed that same year by the "serious" James Bond entry YOU ONLY LIVE TWICE.

Those enamored of Austin Powers and Mini-Me should enjoy the playful tone, Mad Magazine elements and Spy-vs-Spy antics, though there are several points where the story dwells on long-winded dialogue and seductions set to Burt Bachrach music  - maybe a good idea in retrospect, as "The Look of Love" has found its way into some legit 007 compilations, just about the only acceptance this thing possesses amidst the faithful. To most, it remains the goofball mutant-outcast crazy-uncle-in-the-attic among the Bond movies. But you haven't truly vicariously experienced late 1960s psychedelic culture unless you've seen it. Take that as much as a warning as a recommendation. But add more stars for putting it right next to SKYFALL; that act alone might qualify this as the best darned filmgoing experience of the year, as I have no particularly high hopes for the Cleveland International Film Festival or the STAR TREK sequel. (2 1/4 out of 4 stars)