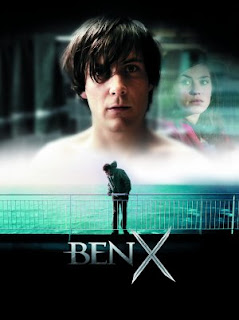 In the five years since the 2007 Belgian-Dutch film BEN X was made, school bullying has gone from an unremarkable inevitability of youth to a full-fledged member of America’s cultural rogues gallery. Whether or not bullying has truly reached the psychically poisonous pandemic levels that recent public service messaging would lead us to believe, it’s certainly something of which adults need to be aware. Some kids are jerks and being picked on sucks, regardless of where you live.

Take Ben (Greg Timmermans). Socially crippled by Asperger’s Syndrome, the high school misfit is tormented by his classmates in a number of increasingly humiliating (and increasingly violent) ways. His only solace is found in ArchLord - a fantasy-themed Massive Multiplayer Online Role Playing Game, which he plays daily with an online companion. Increasingly frustrated by his lack of connection and control over his real life, he begins to retreat into the universe of the game, scaring his loving mother (Marijke Pinoy) and the flesh-and-blood girl behind his beloved gaming partner, Scarlite (Laura Verlinden).

It’s easy to watch writer/director Nic Balthazar’s BEN X and, forgetting it was made half a decade ago in another country, write it off as manipulative agenda art marshaling around two over-easy hot-button topics: bullying and autism (though it’s likely this is exactly why its hitting the festival now). Maybe it is agenda art – the film’s narrative arc is wound tightly around the harsh indignities visited upon Ben – but it’s agenda art that both establishes its central character as an individual rather than a rhetoric-stuffed cipher, and self-consciously avoids the type of feel-bad guilt-grubbery undertaken by Scared Straight programs.

BEN X – named for Ben’s hulking level-80 ArchLord avatar – is as much about the story as it is the telling. Balthazar uses a ridiculous number of cinematic tropes, tinkering with both form and chronology to allow the audience full, heart-breaking access to Ben’s thoughts and experiences.

The teen’s childhood memories are broadcast in hazily shot flashbacks designed to highlight his detachment from reality. There are tantalizing flash forwards in the form of documentary-style talking head interviews with Ben’s family and friends, all of whom allude to a singular, defining event toward which the narrative is unstoppably rolling. We get glimpses of the world through Ben’s perspective, transforming everything into the pixelated landscape of ArchLord, complete with ogres and medieval weaponry. If that wasn’t enough, there’s also persistent voiceover.

It could’ve been a mess, but Balthazar  commits to each device, uses them consistently, and is able to operate them in tandem, building  a singular storytelling mechanism that safely skirts cinematic gimmickry (ok - some of the video game stuff is a tad overwrought) while chugging swiftly toward its almost certainly divisive conclusion.

BEN X’s ultimate message isn’t so much an anti-bullying screed demanding that the ruffians of the world end their antagonistic ways, but rather a plea to classmates, teachers, parents and neighbors to be more aware. Balthazar acknowledges that reality is subjective, and we all necessarily inhabit our own fictions, but begs that we not become so self-concerned that we ignore the potential suffering of others or, worse, construct a worldview in which familiar abuses like bullying are regarded as acceptable or even justified.

The film is quick to point out that issues like bullying (or drugs or terrorism) are often only ever publicly acknowledged as a result of an avoidable tragic consequence. Even as Balthazar propels us toward Ben’s fate, using the solemn talking heads and sword-wielding giants to foreshadow the worst, he plays with our expectations as to the exact nature of its increasingly darkening narrative’s destination.

When the revelation finally occurs, it’s a welcome, unexpected twist that challenges our relationship to guilt, and suggests that the conceptual conflicts we wage are as much cold wars against our own consciences as they are physical assaults against identified threats, retroactive awareness perpetrated to assuage our collective shame and wash away the evidence of our own navel-gazing obliviousness.

BEN X shows us that Ben is disconnected from the reality of others – distant and removed from the inner lives of his family and peers - because of his autism. It then challenges us by asking: “What’s your excuse?” (3 out of 4 stars)
Posted by Matt Finley at 12:01 AM