An interview with Joel Schroeder, director of 'Dear Mr. Watterson' 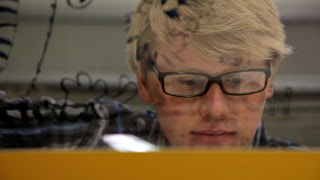 When Calvin and Hobbes debuted in the newspaper comics section in November of 1985, I was a sophomore in High School. Still, even though the main character was a six year old boy whose best friend was a stuffed tiger (or was he real?), I instantly related to the strip. So did a lot of other people, including filmmaker Joel Schroeder, who recently finished his debut documentary feature DEAR MR. WATTERSON. The film examines the impact that Calvin and Hobbes had on both regular fans and Watterson's peers in the comic strip industry, while opting to leave the famously reclusive artist himself alone. The film will be screening at the 37 th Cleveland International Film Festival on April 9th, 10th, and 11th. Schroeder proved much less elusive than his subject, graciously agreeing to be interviewed for the Cleveland Movie Blog.

CLEVELAND MOVIE BLOG: How did you become interested in filmmaking, and how did you get started in the business?

JOEL SCHROEDER: I think my story is pretty typical: in junior high school my friends and I started shooting videos on an old Hi8 camera, most of which I'd be afraid to show many people today.  Then, towards the end of high school, I made a video about our cross country team, and when I saw the effect that it had on our team when we all watched it, I saw the impact you could have as a filmmaker, and I was hooked.

CMB:  I see you directed a few shorts prior to DEAR MR. WATTERSON, but this is your first feature. Why a documentary, and why this particular subject?
JS: After college, I'd had a lot of ideas for films that would come and go.  I'd lose interest in most ideas, but with Dear Mr. Watterson, it was an idea that I couldn't let go of.  It was the first time that I just simply knew it was a film that I had to make.  I grew up with Calvin & Hobbes, and I'm truly fascinated at how it has become something so special to so many people.  I went into film school wanting to make narrative features, but I think documentary filmmaking is just more fitting to who I am.

CMB:  You used Kickstarter to fund your project, and almost doubled your goal. What did that extra money allow you to do beyond what you had hoped for? Is kickstarter just a fad, or do you see it as being a viable way long term to finance projects like this?
JS: We've actually done two separate Kickstarter campaigns, doubling our goal the first time in 2010, and nearly doubling the second time, in summer of 2012, raising a total of over $121,000 all together.  By raising nearly double our goal in the 2nd campaign, we were able to do more in several areas, most noticeably with our motion graphics, sound, music, and final color correction and mastering.  Everything on the film was still low-budget, but we were able to do a little bit more in those areas than we originally thought we'd be able to do.  I'm a huge fan of Kickstarter, and it was an absolutely perfect way for us to make this film.  We were able to make a film about the impact of Calvin & Hobbes, and it was 100% funded by fans of Calvin & Hobbes.  Isn't that in and of itself evidence of the impact of the strip?  I think Kickstarter has been so successful because it fills a need that exists out there for creators and artists and designers--as well as people who want to encourage creativity and independent *fill-in-the-blank*.  As long as people don't start viewing Kickstarter and similar crowd-funding platforms as a just regular retail environment, then I don't see it being a fad.  We clearly had great success with Kickstarter for this project, and I hope all of our Backers feel that way as well.  And that's the key: creators must respect the commitment that they are making to their Backers to follow through with what they plan to do.  Happy and satisfied Backers will continue to want to find projects to support.

CMB:  Bill Watterson has reached the point where, like J.D. Salinger, he almost as famous for being out of the public eye as he is for his work. Making a film about someone that you know isn't going to make himself available to you obviously presents a problem. How did you decide on what approach to use to get around that obstacle? Were there any other ways of making this film that you considered?
JS: From early on, I knew the film would be from the perspective of Watterson's fans (including myself), colleagues, and other cartoonists.  We knew that Watterson would not be involved, and that was simply the reality we were dealing with.  Sometimes the limitations or obstacles in front of you can set you up to create something even better than what you may have done without those limitations.  We didn't have Watterson, so we used my own exploration to guide the film.  This was never going to be about following me on a quest to find Watterson though.  That was never something I wanted to do.

CMB:  You interview quite a number of Watterson's peers in the comic strip business. Was there anyone you wanted to talk to who proved as elusive as your subject? I'm thinking hearing Mort Walker talk about his disagreements with Watterson in particular might have been interesting.
JS: I'd prefer to not go into specifics about names, but there were definitely interviews that took time to get on the calendar.  I sometimes needed to reassure people that this was not about finding Watterson, but rather it was about trying to understand his impact.  If we had unlimited time and money, there are definitely many more interviews that I would have liked to film.  Of all the people we wanted to interview but were unable to for one reason or another, Richard Thompson, creator of Cul de Sac, is the one person who I regret not being able to involve above all others.  Cul de Sac is amazing, and Thompson and Watterson are mutual fans.

CMB:  All the other cartoonists you spoke with seem to genuinely admire Calvin and Hobbes.  Isn't there someone out there with an ax to grind with the strip, or is it really that universally loved?
JS: Calvin & Hobbes is very widely respected and loved among cartoonists.  Even if someone had a critical thing or two to say about Watterson or his strip, nobody could deny the impact and influence the strip has had, or the genius it took to make it.

CMB:  If Bill Watterson had by some miracle agreed to answer just one question from you, what would you have asked him?
JS: Honestly, I think I'd mostly just want to know if he really understands how beloved he and his comic strip are.  But since I'm not sure if he can even answer that question, I think I'd want to ask him if there's anything he'd do differently if he were repeating the decade of Calvin & Hobbes all over again.

CMB:  What is the main thing you want people to take away from watching this film?
JS: Bottom line, I hope viewers see the possibilities and power of art.  Bill Watterson dedicated himself to honing his writing and drawing skills, he had respect for his medium, and he pushed himself to push his comic strip to the limits.  If he can have such a powerful and positive impact with a simple comic strip, then I think that illustrates how important art is in our world, and the possibilities that exist in all forms of self expression.  And even if you don't care too much for the film, if you go home and read your Calvin & Hobbes books afterwards, we've succeeded.

CMB:  Have you heard through the grapevine if Watterson plans on seeing your film, or maybe already has?
JS: Oh, I have no idea.  I certainly welcome him and invite him to see it, but I have no idea if he has any interest at all in watching it.  Although I hope he does someday.

CMB:  Any plans for your next film?
JS: I have a variety of ideas...just need to see what sticks with me this time around.