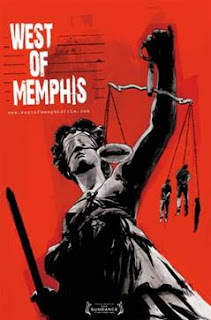 It's sobering to think of how many people, in the short history of the United States, have been jailed, stoned or burned because someone imagined them guilty of witchcraft or Satanism.This peculiar form of judicial persecution isn't confined to 17th-century Salem; it recurs with alarming regularity, with the 1980s hysteria over ritual sex abuse (imaginary, it turns out) in day care centers that led to people being sentenced to life in prison based on wild tales coaxed out of small children, and in the celebrated case of the West Memphis Three, a trio of teenagers from the small town of West Memphis, Arkansas who were convicted of the 1993 murders of three 8-year-old boys found hog-tied, mutilated and drowned in a creek. The murders, which shocked the community, were quickly attributed to "cult" practices, because the boys' bodies were found naked with signs of sexual mutilation.

After a shoddy investigation, suspicion centered on Damien Echols, a troubled 18-year-old with arrests for shoplifting and vandalism and an interest in the occult. Despite the lack of physical evidence linking him to the killings, Echols' reputation among law enforcement was enough to earn him suspicion as the "mastermind" of the murders, and a prosecution theory based on "expert" testimony about Satanism provided a storyline jurors willingly bought. The horror of child murder and zealous prosecutor's ghastly narrative about how the boys were mutilated guaranteed there would be no acquittal of Echols, Jason Baldwin or Jessie Misskelly, a borderline mentally retarded kid who was interrogated for 12 straight hours and whose solid alibi placing him 40 miles away at the time of the murders was ignored by jurors.

After separate trials marked by false testimony, coerced confessions, police, prosecutorial and juror misconduct and the electoral ambitions of the prosecutor and judge, Echols was sentenced to death, while Baldwin received a 20-year sentence and Misskelly life plus 40 years. Following a prolonged campaign for a reexamination of the evidence and a retrial or exoneration – with the help of celebrity activists including Eddie Vedder, Henry Rollins, Patti Smith, Johnny Depp and film director Peter Jackson -- the men were released in 2011 on an Alford plea, a legal maneuver by which they maintained their innocence but pled guilty in exchange for release from prison. It was far from an ideal resolution – the young men still bear the stigma of murder convictions – but given the decay of evidence and the case's lasting notoriety, it was probably the best outcome the supporters could have hoped for.

Amy Berg's WEST OF MEMPHIS is the fourth documentary to cover the case, and it goes beyond the a previous three (HBO's PARADISE LOST 1,2, and 3), offering a plausible alternative suspect in Terry Hobbs, stepfather of one of the boys. An epic-length two-and-a-half-hour documentary, the skillfully constructed and edited film conducts a methodical analysis of all that went wrong at what in the case and the effects of the murders and convictions on the victims' families, the defendants and their loved ones. The balance of blame in the case shifted over the 18 years the young men were imprisoned; one factor that led the state to decline to retry the case was that two of the victims' families had joined forces with the defense. One of them, Pam Hobbs, mother of murdered boy Stevie Branch, is interviewed extensively in the film, which fingers her husband, Terry, as the likely killer. Terry Hobbs' history of domestic abuse, violent rages and frequent beatings of his stepson are documented at length. Hobbs certainly won't be charged with the murders, since the case is considered closed. But whether or not Hobbs was the killer, the film makes it clear that the WM3 were wrongly convicted.

The film also recounts the unlikely romance of Damien Echols and Lorri Davis, a pretty, intelligent young woman who started writing to Damien after seeing him in PARADISE LOST. She quit her job, married him and devoted herself to working full-time on his case, laboring tirelessly against long odds to have the evidence reexamined by top forensic pathologists. (Damien and Lorri are producers of the movie.) After the HBO documentaries, a movement arose to free the West Memphis 3, with celebrity benefit concerts and marches. One interview subject calls it "the first crowd-sourced criminal investigation.". Alternative scenarios emerged – the injuries to the boys' bodies may have been caused by postmortem animal predation rather than mutilation with a knife. (The movie vividly demonstrates this scenario with a huge snapping turtle biting a man's arm.) Witnesses recanted their testimony, admitting they lied under duress or to escape prosecution for other crimes. Still, it was not enough to overcome local corruption. A hearing on a motion for a retrial was presided over by the original trial judge, David Burnett. Not surprisingly, he denied the motion.

The film convincingly demonstrates that the state of Arkansas had everything to gain and nothing to lose by throwing away three poor white teenagers. The crimes were the kind that society demands avenged, and assistant prosecutor and the judge were both elected to higher office after the highly publicized convictions. Seeing the three men walk out of prison and begin to adjust to their hard-won freedom is exhilarating. But in the U.S., that freedom-loving land that imprisons far more of its citizens than any other country, there are countless innocents who languish, forgotten, in prison and on death row. Most of them will not have celebrity supporters or benefit concerts held on their behalf. And most of them will barely see daylight again. 3 1/2 out of 4 stars.