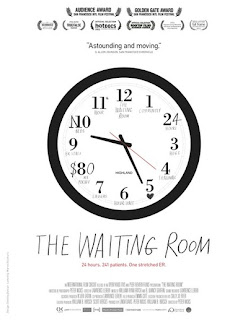 There have been numerous documentaries about the failures of the U.S. health care system, but Peter Nicks' THE WAITING ROOM is a little different. Rather than reciting the usual litany of problems and statistics, the film uses cinema vérité style to show a day in the stressful life of the emergency room of a public hospital in Oakland, California, where patients who don't have insurance come for treatment.  They wait for hours, even days, waiting for their numbers to be called (“Now Serving 49,” reads the sign, the kind you see in a bakery). They sleep, talk, joke, complain. Sometimes they pray. Their ailments are myriad – bone spurs, a testicular tumor, alcohol and drug problems, stroke, bullet wounds, high blood pressure. For many, unemployed, laid off or otherwise disenfranchised, the emergency room is their only source of regular health care. “We're the safety net of society,” says the ER doctor, Doug White. “We're the institution of last resort for so many people.” White and Cynthia Johnson, the no-nonsense Nurse Assistant, treat the patients with exceptional compassion. It is not an easy job, and by the end of the film, you wonder how they do it.

The film weaves the fly-on-the-wall observation with the voices of patients, and we learn a bit about their lives and the conditions that have brought them to Highland Hospital. An older man experiencing pain from bone spurs has worked for decades as a carpet installer, physically demanding work for a man his age. He was forced to take a pay cut because his employers told him illegal aliens would do his job for less. He can't afford to stop working, because he's supporting his daughter and grandchild, who recently moved in with him. A young man named Eric and his girlfriend are seeking surgery for his testicular tumor. They've been through health insurance hell: after Eric was diagnosed at Kaiser Permanente, Kaiser canceled his scheduled surgery because he wasn't a paid member. A homeless man has landed in the ER after a night of drinking and drugs -- Dr. White and the social worker struggle to find him a place to go, because the pastor in charge of his transitional housing program won't take him back.

The film doesn't need narration to convey the message that our health care system is broken, due to the politics of greed and distortion. Health care, accepted as a human right in most other developed countries, is regarded by some here as a privilege, something reserved for those who can afford it. For everyone else – including those tossed out of jobs because of a wrecked economy -- well, there's always the emergency room. That's what candidate Mitt Romney said on “60 Minutes” during the 2012 presidential campaign: "Well, we do provide care for people who don't have insurance. If someone has a heart attack, they don't sit in their apartment and die. We pick them up in an ambulance, and take them to the hospital, and give them care." (Of course, Romney passed a universal health care law as governor of Massachusetts, but that was another Mitt Romney.)

This finely made documentary also allows us to witness the hospital staff's challenges in juggling the enormous patient load, trying to treat as many people as possible while navigating bureaucratic obstacles to find them hospital beds, housing and further care. Patients in the crowded waiting room must take a back seat whenever a serious trauma victim arrives – in the film, a 15-year-old gunshot victim who sadly cannot be saved. An incoming trauma demands that 12 to 15 staff members stop what they're doing to focus on the case, lengthening the already punishing wait time for everyone. The work is emotionally exhausting, and the cases take a toll on the staff, but the film demonstrates their ability to carry on, delivering health care with professionalism and extraordinary concern. 4 out of 4 stars.

A panel discussion including filmmaker Peter Nicks and other prominent guests will be held following the Wednesday showing in Gartner Auditorium at the Cleveland Museum of Art..
Posted by Pamela Zoslov at 12:00 AM