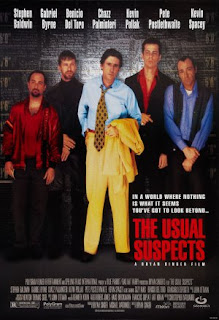 I thought I heard somewhere there was going to be a sequel to 1995's THE USUAL SUSPECTS, or a remake/prequel/reboot, or something? Ohellno! Don't the Hollywood meth-heads still have some crappy 1980s movies left to needlessly remake? No? I guess last year's RED DAWN totally exhausted the Reagan-Bush catalogue.

Still, to paraphrase that obnoxious gay guy whining about Britney Spears on YouTube, why don't they just LEEEEVE THE USUAL SUSPECTS ALOOOOONE! No, in my opinion, it wasn't the perfect crime thriller, not even the very best retro-modern film-noir. For me it mostly gets the asterisk for the most inspired of many PULP FICTION wannabes, along with the underrated THINGS TO DO IN DENVER WHEN YOU'RE DEAD. But THE USUAL SUSPECTS provided a great ride, had some style courtesy rising director Bryan Singer, and most importantly, told a story that's all wrapped up neatly by the end. Most of the characters didn't even live beyond the fadeout anyway. Nobody needs a sequel, except of course for greedy movie executives hoping to pay for their ruinous divorces and underwater McMansions by pimping out an encore of what some have called the ultimate "guy movie."

THE USUAL SUSPECTS starts with a mass-murder/explosion on board a boat in San Pedro, California (such is the crook-talk dialogue that one might later assume the ship blew up from all the f-bombs). Flashbacks and divergent timelines - and it is rather confusing at first - fill in the story, as a police detective questions one of the few survivors, a crippled, shifty and nervous con-artist named Verbal Klint (Kevin Spacey).

He claims that he and the fatalities were all part of an outlaw band centered on Dean Keaton (Gabriel Byrne), a former New York City cop turned career criminal. Lured to the West Coast for a job, the victims were told they had all once offended a legendary international gangster named Keyser Soze, a figure so shadowy he may or may not even exist, and much unsolved malice and mayhem surrounds him.

The police are skeptical that nervous, rabbity Verbal could possibly be involved with Keyser Soze, let alone escape an eyewitness encounter. But then...

THE USUAL SUSPECTS is truly a crime story without any "good" guys, in most any sense (one female character, who seems to represent possible redemption, is very marginal and gets coldly killed offscreen). The degree to which there's any philosophy or morality at work comes from Verbal Klint, who observes that Keyser Soze succeeds because he's willing to go farther and be more ruthless than any other villains (I think much the same was said about New York mobster `Dutch' Schultz, back in his heyday). Moreover, Soze is like the devil, "whose greatest trick was convincing the world that he didn't exist." The character works his ruthless will through unwitting dupes and hirelings, always staying Sauron-like in the background, and by the closing-scene twist he's properly attained mythic status. And, like the later THE SIXTH SENSE and a few other movies that manage to pull off a satisfying "trick" ending, this is a narrative that forces the viewer to think back through things, maybe watch the movie a second time, to see where Singer and his unreliable cinematic POV fooled you.

Sure, I don't quite understand why some continuing-education courses have focused on THE USUAL SUSPECTS (unless Management Secrets of Keyser Soze 101 is the only way one lands a job above minimum-wage these days), but in terms of pure pulp-drenched entertainment, I won't argue. Now, a followup, maybe where a teenage Keyser Soze fights vampires and CGI dragons or meets the X-Men, that's where I say enough already (then again, I didn't think we'd ever hear of Hannibal Lecter again after his last terrible film appearance, and look what's happened). (3 out of 4 stars)