The Legend of Neil (now on video) 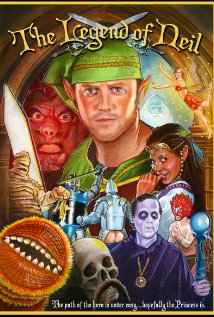 I dread this time of year. Frankly, at my advanced age I dread any time of year, but this one in particular. It's the season when the Oscars indulge the film industry's worst traits of narcissism, followed of course by the Cleveland International Film Festival. For whom I used to work, perhaps explaining the psychic damage. It's just MOVIES, people. Get over yourselves! If as much effort had gone into finding a cure for cancer or peace in the Mideast as there has into blockbuster comic-book superhero dramas, life might be a bit more bearable right now. Which is why something like LEGEND OF NEIL, not likely to be honored by the Academy, or even the Cleveland Film Society, is a breath of fresh air in these film-polluted weeks.

Any blockbuster filmmakers determined to render the classic videogame Legend of Zelda as mega-budget heroic-fantasy a la PRINCE OF PERSIA: SANDS OF TIME will have to compete with the inevitably higher entertainment quotient of Sandip Parikh's low-budget satire. I am given to understand that LEGEND OF NEIL was a YouTube project by West Coast DIY types that went "viral" and eventually got a pickup courtesy the Comedy Central cable network, financing that enabled Mr. Parikh to do further episodes and complete the cycle. The hero is indeed a guy named Neil, a New Jersey loser and Nintendo addict. Because he practiced drunken, kinky autoerotic asphyxiation with a game-controller cord while playing Legend of Zelda, Neil is magically teleported into the role-playing  game as a warrior-elf avatar and must cope with the radical lifestyle change.

There's no fancy TRON stuff; almost the whole schtick (154 minutes in total) is chintzy live action, with some primitive spoofing of the aesthetics of 8-bit side-scrolling and "levels" - and yes, gamers, this is a takeoff on the original Nintendo NES "Zelda," really old school. I never played it, making my viewing experience pretty weird, but apparently those of you who have quested to rescue Zelda from the goblin-like Goran and his henchman Wizrobe will find in-jokes galore (or "gla-lore," since putting "gl" in front of words is apparently very germane to the Zelda universe).

In individual short-subject episodes, Neil (co-writer Tony Janning) replenishes his life force via sex with an especially hormonal fairy; learns his wizard-like mentor has Tourette's; falls in love with the captive Princess Zelda, despite a surprise that she's actually black; and finds himself having to sing in a gimmicky all-musical chapter (I say, it does take major comic balls to take a shot at DOCTOR HORRIBLE'S SING-ALONG BLOG). Yes, sophomoric sex gags and collegiate profanity predominate - Wizrobe is gay, tee-hee! - but so does inspired stuff, especially the random takeoffs on The Office ("The Gloffice") and GLORY.

Okay, the Harry Potter bit ("Glarry Potter") I could rather see coming way in advance. But it's not as though the operating budget of a small city were spent on this nonsense. It's just fun, and, in the the making-of disc extras, I for one caught the sense of joy from the talent involved. One makeup-fx specialist in particular seems charmed that she's doing such a wacked-out project, instead of just another zombie-horror cheapie for the direct-to-video bin.

So there, LEGEND OF NEIL. No stuntmen killed, I don't think, no lawsuits (oh, probably plenty; I just don't know about them), no lives ruined, no pre-production budgets that could have taken care of my money woes for good. Just unpretentious, harmless, light entertainment, like the Mickey Mouse comedy in SULLIVAN'S TRAVELS. More cinematic endeavors should be casual treats like this. (3 out of 4 stars)