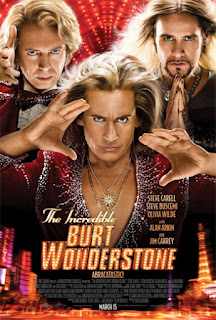 Funnyman Steve Carell plays a down-on-his-luck magician vying for a second chance on the strip in THE INCREDIBLE BURT WONDERSTONE.  Directed by sitcom svengali Don Scardino (30 Rock, Ed, George Lopez), the rags-to-riches farce does for professional magic what SEMI-PRO and BLADES OF GLORY did for basketball and figure skating.

An opening flashback shows young Burt as a 1982 latchkey kid who must bake his own birthday cake because his busy mother works two jobs.  He’s got zero self-esteem and is force-fed tree bark by a neighborhood bully (played by DIARY OF A WIMPY KID’s Zachary Gordon, oddly enough)—but Burt’s outlook improves when he receives a magic kit whose clunky instructional VHS videotape promises to make him the center of attention.  He’s enthralled by the art of illusion and can barely wait to demonstrate his skills for sickly school chum Anton Marvelton (Steve Buscemi).  The two oddballs form an alliance that transforms them into sleight-of-hand superstars, a la Siegfried & Roy.

The Incredible Burt & Anton are in their tenth year of residency at a swanky Vegas hotel managed by penny-pinching impresario Doug Munny (James Gandolfini) when their tired act—and friendship—is challenged by cable TV illusionist Steve Gray (Jim Carrey).  Their theme song?  Steve Miller Band’s “Abracadabra.”  Burt’s lingering mommy issues have manifested themselves in misogyny and arrogance, and the smug showman retires female assistants faster than Gallagher sledges through watermelons.  He woos women to “the largest bed in Vegas” without letting them finish their own sentences (or getting their names right) and sends them packing in the morning with autographed souvenir photos.  He fancies himself too gosh-darn classy to be eclipsed by Gray, whose attention-grabbing consists of self-mutilation and freakish feats of endurance.  But when Munny complains of sluggish ticket sales, it’s game on for Burt and Anton.

“He’s no magician!” Burt protests.  “He doesn’t even wear a costume!  He mumbles and cuts himself.  I have a niece who does that!”

Things go horribly awry when Burt and Anton try updating their show with an in-public sequestration in a suspended Perspex box.  The magicians fall out (literally and figuratively) and lose new assistant Jane (Olivia Wilde) to the competition.  Burt’s reduced to living in a dingy hotel, hawking paper towels in supermarkets, and doing card tricks for seniors at a nursing home.  Brokenhearted Anton turns to philanthropy, only to discover that poor kids are more concerned with their next meal than magic.

Munny gives Burt one last shot at redemption, inviting the washed-up wizard to audition for a slot at his lavish new casino.  Wonderstone must make amends with both Marvelton and Jane if he’s to recapture his former glory, top the nutty newcomer and win back his audience.  He gets help from his boyhood hero, elderly illusionist Rance Holloway (Alan Arkin), who reminds Burt why magic fascinated him in the first place—but he’s not above using a little trickery (and alchemy) to out-dazzle Gray.

Carell is a gas as the vainglorious, overconfident, pampered Burt.  He’s made a career of playing buffoons and dimwits (The Office, THE 40-YEAR OLD VIRGIN), so it’s not exactly a stretch.  Buscemi delights as Burt’s mild-mannered (if equally oblivious) foil, but the movie’s true sweetening is provided by Arkin and Wilde, whose more grounded, vaguely human characters act as emotional conduits for the audience.

Carey, appearing opposite Carell for a third time here (BRUCE ALMIGHTY, HORTON HEARS A WHO!), nearly steals the movie along with Burt’s job.  His “mind-raping” illusionist is a Criss Angel / David Blaine-esque performer who electrifies the Vegas strip with Christly cool, rock star swagger, and feigned Emo-indifference.  Gray pounds nails with his forehead, shoots fire from his fingertips, and sleeps on hot coals—nauseating as much as astounding his onlookers.  His character embodies both the watch this allure and look-at-me desperation of reality TV jokers (Jackass) while his outlandish stunts satirize the bloodlust of voyeurs who tune in regularly for such tripe (Fear Factor).

Real-life illusionist David Copperfield pops up to give Burt some advice.  Jay Mohr cameos as Rick the Implausible, a casino lobby entertainer with a short attention span.  German comic Michael Herbig is his drinking buddy, an animal trainer whose work-related wounds worsen over time.  Also look for Brad Garrett (Everybody Loves Raymond) as Burt’s baritone-throated lawyer.

This isn’t great cinema, so don’t bother checking for hidden wires and mirrors to see how it’s done.  But yes, despite the tired long-shot comeback premise, it packs enough laughs—solid, tear-jerking guffaws—to warrant a look.  Just pay no attention to the man behind the curtain.

BURT WONDERSTONE is PG-13 for risqué humor, innuendo, and mild violence (some blood).  One sight gag involves a condom (it doesn’t leave the wrapper) and the trick removal of a brassiere during foreplay (no nudity). Parents won’t want their younger kids (boys especially) emulating Steve Gray’s masochistic magic or copping Burt’s chauvinism, even if the script rectifies things later by casting women (Wilde) as powerful equals and older folk (Arkin) as useful and inspiring.  2 1/2 out of 4 stars.