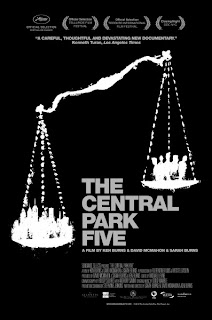 The Steubenville rape case has dominated headlines and airwaves not just here in flyover-land, but internationally. It's got all the elements that set both the mainstream and the trash media (same thing, oftentimes) salivating: sex, race, youth, female victimization, drugs/alcohol, outrageous violation of public morality - and football. But imagine - just imagine for a moment - that all the accused teenagers were completely innocent. Railroaded in an official frame job.

I'm not saying that's what happened in poor Steubenville. I'm just telling you that something of that magnitude - actually, much bigger - did indeed happen, in front of a revenge-thirsty worldwide audience. Most of whom probably still don't know that a travesty of justice occurred.

I sincerely hope the new documentary THE CENTRAL PARK FIVE gets the  word out about the infamous "Central Park jogger" rape case in New York City, the truth you didn't get from your downsized daily newspaper or corporate-owned TV news that cares more about Survivor results (or high-school football). And there's a chance that this documentary actually might - because the filmmaker here is none other than PBS darling Ken Burns and his name-brand Florentine Films.

Those viewers who associate Burns with a nice, safe, crowd-pleasing, off-the-rack style of documentary, narrated in the convivial voice of Keith David or Tom Hanks, set to nostalgic ragtime music and full of slow camera pans across old photos of baseball players or Civil War portraits, are in for a shock. THE CENTRAL PARK FIVE is a true-crime expose in the tradition of the PARADISE LOST series. On April 19, 1989, a white woman jogger - who turned out to be an upper-crust financial analyst - was found brutally raped, beaten and left near-dead in New York's Central Park.

Against a backdrop of horror that such a thing could befall such a shining citizen Mayor Ed Koch vowed swift arrests and retribution. As it happened, an NYPD dragnet of the Park that eventful night already had in custody five black and Hispanic boys, culled from a larger group of unruly teens who had been tormenting a homeless man in the Park and jumping turnstyles in the subway. A charge of gang-rape was conveniently pinned to the quintet. In the meantime, we learn, a black rape victim was thrown off a roof in the ghetto; nobody much noticed.

Police interrogations elicited videotaped "confessions" from the kids - later the boys would say they had no idea what was going down, and they waived their Miranda rights and said what they thought cops wanted to hear so they could go home. With the announcement that New York's Finest had collared the thugz, tabloid news trumpeted the instant myth of feral black "wolf packs" on the prowl in our urban jungles. There was even a quickie B-movie called NIGHT OF THE WILDING (I'm pretty sure I've got it on VHS; was probably in the cheap bin at a Blockbuster liquidation).

Except no "wilding" actually happened, as the movie shows. It was all a frame job (and yes, the late Ed Koch is one of the participants here; I wonder if Florentine gave him any inkling what the production is about). DNA evidence and an event-timeline failed to link the suspects to the assault. The jogger, who did survive, had no memory of the crime. All five accused boys, proclaiming their innocence and turning down plea deals, were convicted and sent to prison, mainly on the strength of the videotaped confessions, and a New York City invested heavily in a race-hate mentality that, one interviewee says, would have meant lynchings in a previous era (the ones the conservatives call the "good old days").

[SPOILER ALERT] No, dittoheads, Ken Burns is no Michael Moore-style liberal trying to rewrite history to Al Sharpton dictates here. In 2002, the Central Park Five were released. It seems that a notorious serial rapist (Hispanic, for those of you who keep score), already in prison, confessed to being the Central Park jogger's LONE attacker - and he had DNA and previously unpublicized details about the crime that proved it. You probably didn't read about this development in your local newspaper or see it on TV; I theorize that months of Baby Boomer mourning for the World Trade Center Towers made our press heroes decide to shove the embarrassing Big Apple item to the back pages.

Ken Burns, eschewing any narrator, speaks to all five former teenagers (one of whom still won't show his face on camera), about how the wheels of big-city "justice" crushed their lives. In what one may consider a major omission, the grievously abused jogger herself (who ultimately did come forward to reveal her name and write a memoir) is not in the movie. Her sufferings certainly would have added another dimension to the tragedy. Though it perhaps speaks for itself that we're told NYC police, prosecutors and media (some of whom built their careers on avenging the Central Park jogger) still defend their actions and seem to think the world would be better off if Antron McCray, Raymond Santana, Kevin Richardson, Korey Wise and Yusef Salaam still languished in some for-profit cellblock somewhere – instead of walking around free, just because they were - what's that word? - innocent.

Such is New York City folks. Of course, we will assure ourselves that whatever happened in Steubenville was nothing like this. Nooooothing like this. And maybe it wasn't. Still, watching THE CENTRAL PARK FIVE will make you lose whatever faith you might have had in Police State America, especially when race gets involved. It wouldn't surprise me if the big corporations who have helped fund Ken Burns PBS productions in the past suddenly decide they lack the largess to underwrite his future projects, but can advertise on Glenn Beck. Hopefully, Burns will get crowd-sourcing from Anonymous and Occupy Wall Street if he needs it. (3 1/2 out of 4 stars)
Posted by Bob Ignizio at 12:00 AM