[THE ABCS OF DEATH opens in Cleveland on Friday March 15th exclusively at the Capitol Theatre.] 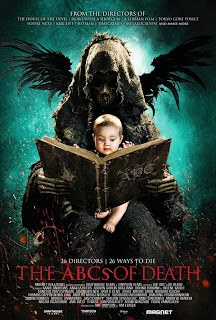 26 directors from around the world were each given a letter of the alphabet and asked to make a short vignette depicting a form of death that starts with said letter. The results were compiled into a depressing piece of garbage called THE ABCS OF DEATH that I wasted slightly over 2 hours watching, and I'm not wasting any more of my time writing a review.

That's what I wanted to write, anyway, but I guess I owe you readers a little more than that. Basically what we have here is the horror movie version of “Ow, My Balls” from Mike Judge's increasingly prescient IDIOCRACY. If you're at least 18 years old, but still have the mentality of a 12 year old who thinks that dead baby jokes are the height of edginess and hilarity, you'll probably love this. Anyone else should probably take a pass.

As bad as the overall viewing experience is, a few segments do stand out here and there. Thomas Malling's homage to Tex Avery ,“H if for Hydro-Electric Diffusion”, displays some creativity and talent, and Michael Sarmiento's “D is for Dogfight” makes good use of visual storytelling and offers a satisfying surprise ending. It also manages to be brutal without wallowing in gore, and actually feels like it has a point to it. The rest of the segments are mostly just throwaway gross-outs, some intended to elicit laughs, some trying for a grim seriousness, and all doing their best to be as disgusting as they can. And then there are a handful of shorts that are just so vile and mean spirited I nearly quit watching. But I soldiered on, for what it was worth, and that wasn't much. 1 out of 4 stars.
Posted by Bob Ignizio at 12:04 AM