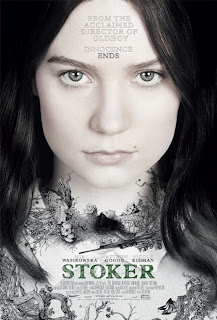 Don’t worry – despite what all my co-workers thought, STOKER, Park Chan-Wook’s (OLDBOY) first English language film, is not another vampire movie.

Of course, the title is a reference to good ol’ Bram, but seemingly meant to evoke the tone and tropes of Victorian Gothic literature as a whole rather than the supernatural specifics of the ubiquitous Dracula. Somewhere between naïve homage and self-conscious pastiche, the film – a darkly comic and brutal domestic drama – is loaded with Gothic trappings, from the pale family locked away in a palatial manse to sex scenes overtly disguised as piano duets to the melodramatic dread and bloody fixations it drags through the house’s cobweb-latticed basement hallways.

Style and flourish aside, STOKER is a character study - a lurid month in the life of India Stoker (Mia Wasikowska), a lonely 18-year-old girl braving her crumbling family, blossoming sexuality, and the snakes’ nest of dark desires that roils inside her, aching to wriggle free.

After her father dies in a mysterious and violent car accident,  India and her wine-slopping, debutante mother, Evelyn (Nicole Kidman), are left to grieve in their sprawling family estate. Almost immediately, the mysterious, charming long-lost Uncle Charlie (Matthew Goode) moves in to help with the family affairs. As the purposeless Evelyn flings herself at the handsome interloper, Charlie gravitates toward young India, who becomes fascinated with his eccentric calm and the hints of an all-too-familiar will to violence lurking just beneath his laconic facade.

Set up almost as a three-person stage play, with a wonky tone that vacillates between soap opera theatrics and psychological horror, STOKER affords its cast plenty of opportunities to shine, and all of them do. Particularly Wasikowska and Kidman, the former of whom manages to project a daring rawness and sexuality from a character who might otherwise come off as a quirky playmate for some lunchroom clique led by Wednesday Addams and Lydia Deetz.

Still, in the hands of a less confident director, it’s easy to imagine first-time screenwriter Wentworth Miller’s script collapsing under its own precious weight. Though certainly less stylized than his vengeance trilogy, Wook-Park’s signature is scratched indelibly across every richly colored frame.

Yes, the film is beautifully shot, but the director also masters the film’s mix of humor, pathos and exaggerated shocks. Like his best films, it challenges genre expectations while never devaluing the importance of character. Even one of the screenplay’s most labored conceits – the notion that both India and her uncle have a heightened sensory ability – is made passable (though still vaguely feels like AMELIE by way of Hot Topic) through Park’s daring use of film speed and sound design.

As for said screenplay, I have no qualms pointing out that, under all the style and flair, STOKER’s narrative is dumb as all hell. It’s a simple, sensationalist story that, while not part of the recent vampire craze, fits snugly in the current all-too-well-worn fixation on monstrous protagonists (a trend that’s obviously close to peaking, given its infiltration of primetime via shows like The Following, Bates Motel and Hannibal). After conceding that, yes, monsters really do exist, the film commentates a familiar gladiator bout between genetic nature and familial nurture. It then presents a wrinkle: Regardless of which force triumphs, from the child’s perspective, the universe is wholly deterministic.

This philosophical crux ultimately offers just enough weight to India’s characterization, which is otherwise a repetitive barrage of light/dark symbolism (white and black shoes, chocolate and vanilla swirl ice cream, piano keys, etc. etc.), to make the movie worthwhile. But even this heavy-handed imagery had me a bit stymied. After all, the Victorian tomes to which the film owes its titular reference is replete with these types of metaphorical hammer blows. Is Miller deftly leveraging the nuances of the genre in the name of cinematic voice? Or is he merely hiding behind it, layering on nudging tonal references like so much window dressing? Park’s presentation of the material is seamless enough that we may never know.

With that in mind, it’s hard not to notice several less-than-subtle visual jabs at the TWILIGHT saga, which, when combined with its coy, vamp fan-baiting title, make me question whether Miller's STOKER is a loving interaction with stories from the past, or simple, vain reaction to current cultural trends. (2 1/2 out of 4 Stars)
Posted by Matt Finley at 12:01 AM