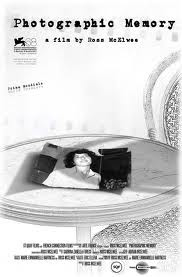 I must confess, I was a little shaken to read an iconoclastic negative review online of PHOTOGRAPHIC MEMORY. It was actually a fairly reasoned complaint from a well-informed reviewer who said that throughout this nonfiction feature-essay, esteemed documentary filmmaker Ross McElwee drones on and on, in his flat, intrinsically melancholy voice, about his past, his present, and everything else, and how it impacts him. It's all about him, him, him, the writer griped, rarely allowing anyone else to get a word in.

Well, yes, that's fair, on the surface. But this is Ross McElwee we're talking about. Since his 1986 debut with the film-festival favorite SHERMAN'S MARCH, he has made his reputation with more or less the same MO: a confessional filmmaking style giving his POV of life, the viewfinder (until now, 16mm) allowing us access into Mondo McElwee, for his private thoughts and observations as a self-deprecating, intellectual southern gentlemen exploring his own preoccupations and relationships through cinema's lens. Being Ross McElwee-centric is the guy's raison d'etre. For fans who have followed McElwee's world through the followup features TIME INDEFINITE and THE SIX O'CLOCK NEWS, any break from that style would be most disconcerting.

(As for the flat, melancholy style of speaking, I must admit to having one myself - my emasculating ex-girlfriend was quite disdainful of it. Honi soit qui mal y pense.)

PHOTOGRAPHIC MEMORY is McElwee's latest entry in the ongoing saga of self-examined life since his 2004's BRIGHT LEAVES - in which McElwee fixated on the what-if genealogy trivia that, had things only gone differently, he might have been born into a wealthy tobacco dynasty and never have lacked for funds. Viewers who saw BRIGHT LEAVES (come on, surely some of you have good taste) might remember it ended with a sort of generational passing of the torch, as Ross' personable little son Adrian begins to take up dad's lead, acting as a sound man and production assistant.

PHOTOGRAPHIC MEMORY picks up that thread. Now Adrian is a teenager. Though still interested in filmmaking - mostly extreme-sports stunts  for social media - teen rebellion has left the formerly friendly boy sullen and argumentative and withdrawn into his handheld devices, text-messaging and maybe-serious romance with a girl. Adrian seems to have no firm college plan or goals, except to smoke pot - quite a lot of it (and the kid isn't even a Clevelander, amazing).

The suitably alarmed Ross McElwee nonetheless reins in his parental outrage to remembers HIS young manhood, as a vagabond photographer in 1970s France, also with no thought-through career path. That did indeed dismay Ross' own father, a successful surgeon, shown in grainy archival footage (that youthful Ross was enormously prescient to get at the time).

As a sort of solo bonding exercise long-distance with Adrian, as well as a kind of existential midlife-deal, Ross flies to France to retrace his 1970s footsteps. As a consequence, he abandons bulky celluloid film for more easily portable digital-video and a laptop - even though Ross professes to still love the tactile quality of cine film and chemical still-photography, and he mistrusts memory-chip cards (perhaps metaphorically comparing them to the fallibility of human recall).

Ross revisits the village in Brittany where, decades before, he apprenticed with a jazz- and philosophy-loving French shutterbug, Maurice, who fired him under mysterious circumstances, so unexpectedly that McElwee wonders if he didn't imagine it. This makes an enigma that Ross partially solves when he finds and interviews Maurice's ex-wife about what exactly was going on behind the scenes, while a more innocent Ross worked in the darkroom.

McElwee also seeks to reunite (platonically) with Maud, a former lover, captivating in old B&W photos, whose surname he doesn't even remember. Again, this episode results in conflicting recollections of what really happened, what Ross thinks happened, and what Maud thought happened. Who is correct?

It's a classically McElwee-style rumination upon life, family, fatherhood and remembrance over time's relentless passage. Yes, and about being Ross McElwee. That part is rather inescapable, n'est-ce pas? I, for one, am glad he chooses to share these stages of his life with us, droning, self-doubting monologues and all. Or would critics have complained less if he made sex tapes for E! and his name were Ross McKardashian? (3 out of 4 stars)