Olympia Part 1: Festival of the Nations (March 14th and 15th at the Cleveland Cinematheque)

[ OLYMPIA PART 1: FESTIVAL OF THE NATIONS screens Thursday March 14th at 6:45 pm and Friday March 15th at 7:15 pm at the Cleveland Cinematheque) 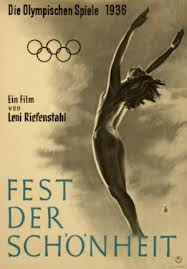 This week the Vienna Philharmonic has been owning up to having, oh, just a few unsavory connections during the Third Reich years some three-quarters of a century ago. I like that; it amuses me to see overturned the wishful myth that our “artists” and creative classes are always in the heroic forefront of positive social change and protest against tyranny. Yes, certainly some of the rabble are, but the ones who are especially reliant on money and technology to stay on top – filmmakers most of all – will readily toady up to whatever fascist or communist dictatorship is in power to gain the largesse.

Exhibit A (through Z): the late, great Leni Riefenstahl, possibly the greatest female filmmaker of all time – and tainted forever by Nazi connections (the punchlines just about write themselves on that one). I read most of Ms. Riefenstahl’s late-in-life autobiography, with her Sgt. Schultz “I knew nooooooooo-thingk!” defense that she had no idea Mr. Hitler and his regime were doing all those terrible things while Leni worked for them. You know what? I can believe a cinema artist could indeed be that willfully myopic. It’s all about The Project with that sort. And indeed, even though her mainstream film career lay in ruins after V-E Day, nobody was able to put a noose around Ms.Riefenstahl’s neck for crimes against humanity, and today her films, especially OLYMPIA part one and two, still hold up as true masterworks/deals with the devil.

One could exhaust a thesaurus of superlatives to describe Leni Riefenstahl's record of the 1936 Olympic Games in Berlin, very possibly the best sports film ever made or ever likely to be made. Yes, even that Kevin Costner script about the Browns draft we're told might go into production isn't likely to overshadow OLYMPIA PART 1, true fact. Commissioned by the International Olympics Committee, OLYMPIA (and its second half, OLYMPIA PART 2: FESTIVAL OF BEAUTY) was produced under Nazi authority. Yet neither feature betrays obvious favoritism to any particular demographic of the world-class company of athletes who assembled - unless you know that the German teams have no Jewish members.

Astounding prologue of ruins and the Parthenon in Greece show the ancient statues literally coming to life. Then the Olympic flame is carried to the mighty new stadium in Berlin, where Adolf Hitler opens the games (Rudolf Hess and Joseph Goebbels are also on hand).

Of course, against all dictums of Aryan supremacy, the "American negro" Jesse Owens (a Cleveland lad; I understand he almost got lynched here once) turns in historic performances, winning an unprecedented four gold medals in track and field, although the prowess of Finland's running team is also part of Olympic lore.

Riefenstahl, vested with Third Reich cachet after making the propaganda masterpiece TRIUMPH OF THE WILL for Hitler, was able to command a Panzer division of crack cameramen. Using state-of-the-art cameras and lenses, she did things here in 35mm that had never been done before (some seldom attempted since), to try to capture the rhythm and the effort of the individual sporting events. Riefenstahl spent 18 months editing the 200 hours of material as meticulously as she had shot it. Sometimes this appears to necessitate the recreation of an event after the fact, as when a Japanese marathon-runner is shown up close, with POV shots of his own limbs and pounding feet on the ground.

On that note, check out the discus and the shot-put early on; Riefenstahl's lens doesn't follow the flung projectile (as the javelin contest later does), but rather the expression on the athletes' face, their body language, as they hear the results.

As more than one commentator has said, the fact that these young men (and women) would mostly be embroiled in a global war a few years later, put to work trying to kill each other (hence, no Olympics in 1940), adds a tragic depth to the material, as do the flashes of fascist uniforms and swastikas. But even a visitor from another planet could watch this film and sense the ode to universal human striving and effort that underlies the games.

Needless to say, Allied nations cooled to this film once hostilities broke out (it won the "Mussolini Prize" at the Venice Film Festival, natch), but by the 1950s was appearing on critics' lists as among the best features ever made. Oh, and just to add injury to injury, know that of the three naked muses shown during the Parthenon sequence – one of them is a nude Riefenstahl herself. A natural athlete, she was so strikingly attractive that, just a few generations later, Leni Riefenstahl would most certainly have qualified to become one of James Cameron’s ex-wives (I’m assuming there will someday be a reality show about all of them). To quote that infamous Catherine Deneuve cosmetics campaign, don’t hate her because she’s beautiful. Hate her for the likelihood of turning you down for dates, hate her for being more talented than you, hate her for being a Gestapo tool, hate her for being able to out-ski, out-swim and out-mountain-climb you, hate her for photographing Jesse Owens better than you, hate her for everything, dammit! (4 out of 4 stars)
Posted by Charles Cassady Jr. at 12:00 AM