Nobody Walks (now on video) 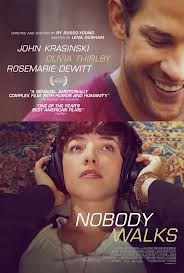 If you watched the Academy Awards this year, or any recent year - and no sweat if you didn't; the NBC documentary about behind the scenes at Saturday Night Live was rather more entertaining - then you'll certainly have noted that, in just about every winner's speech where relationships apply, the lucky Oscar holder thanks his dear wife (female winners don't seem to feel the need to thank husbands, credit Hilary Swank for that feminist advance). I always find this a little funny, given that, as we know, a careerist in the cinema biz could be married to a stunning, oft-naked supermodel and devoted mother of his perfect children, and it doesn't matter; first opportunity he gets, he'll tumble into bed with any on-set doxy he can grab. I won't name any names - I'll just name a title: SNOW WHITE AND THE HUNTSMAN. Oh yeah, you know what I'm talking.

Yet, there they are every year at Oscar time, thanking the wife on international television. And, later, while she's taking the Oscar out to show it off to her side of the family, our guy will be copulating with the pert little pepperpot PA young-enough-to-be-his-daughter he met on the Red Carpet (or Angelina Jolie, as it's been known to happen).

Hard not to think such negative thoughts especially after NOBODY WALKS, an indie drama directed by Ry Russo-Young and co-written by current Hollywood It Girl Lena Dunham. It depicts adultery among the beautiful people, indie/Sundance style, in the home studio of a freelance Hollywood sound-effects specialist dwelling in suburban splendor in the affluent Silver Lake neighborhood of greater Los Angeles. I would presume the title is a reference to the famous maxim that while people walk all over the place in New York City, nobody walks in LA, and thus the great cultural divide between America's twin arts capitals. But so what? As long as showbiz is involved, no one can be counted on to behave around the opposite sex.

On hiatus in between big-profile movie projects, LA audio tech Peter (John Krasinsky) commits to help Martine (Olivia Thirlby), a young visual artist from New York City, in creating a sound design for her film loop installation of creepy closeups of insects, arachnids and human skin.  I've long imagined that if  "video art" didn't really exist it would still have to be invented, to serve as a plot device in stories such as this.

Martine, for the duration of the work, lives a houseguest under Peter's roof. Martine is an unconventionally sexy boho-chick in close cropped hair, of the type one sometimes sees around here in Coventry and bits of Lakewood (mostly around the Virginia Marti School). Martine attracts men in profusion, and she enthusiastically returns their attention with no-strings sexual hookups. While Peter's assistant makes a play for Martine, the video vixen and Peter instead succumb to mutual fascination for each other - despite his marriage and children. It turns out having a soundproofed recording studio on the premises provides a dandy trysting place for the pair.

Peter's wife Julie (Rosemarie DeWitt) is no fool, however, having previously married and divorced a musician - a guy who still comes around courting her, as if he already senses the cracks in the relationship. Julie must weigh the betrayal against her own loyalties, values, options and feelings for Peter. Meanwhile their daughter Colt (India Ennenga), not exactly surrounded by good role models, starts playing tricks with her own dawning sexuality, causing uncomfortable drama with her male tutor.

Is enigmatic Martine the bad-girl catalyst for all this unhappiness? Is she more sinned against than sinning? Are all men just pigs, period? Does Pope Benedict, in his retirement, watch this at home and say "Thank God I never had a wife or girlfriend?" It remains for the viewer to sort out victims and villains in the non finger-pointing script - though, personally, I blame video art.

While the domestic angst breaks little new ground, setting NOBODY WALKS amidst the small-print names in movie credits makes a slightly offbeat ambiance, while still allowing the lucky Flyover Land viewer access to the Tinseltown of gated communities, aerobicized bodies, sun, palm trees and swimming pools. I guess for those of you mourning the recent cancellation of 90210, this can pass as a more upscale LA melodrama. (2 3/4 out of 4 stars)