[MY PERESTROIKA screens Monday March 25th at 5:30 pm at the Wolstein Building Auditorium, on the CWRU campus.] 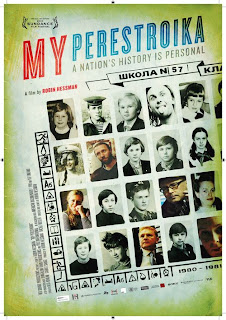 Someday I do hope that Ken Burns or Ric Burns or someone else in the Florentine Films stable does a massive, multi-episode Cold War docu-history, interviewing all the major players on both sides - the Kremlinologists, the KGB Boris Badenovs, the turncoats, the peaceniks, the Reaganites, the proxy-war guerilla leaders in the Third World, etc. Bet the stories they have will set your blood boiling. I've heard some of them. CIA agents were apt to set cats on fire and let the agonized, dying felines run through Cuban cane fields, torching the crops to spoil Castro's harvest quotas (remember that next time ARGO or TV's 24 glorifies the Agency). Dick Cheney - who still defends the Iraq Invasion - allegedly ordered a major stand-down in US war-footing against the Soviets. Supposedly, in the mid-1990s, as the USSR fell apart, Cheney watched a Pentagon computer-simulation of how a full nuclear-missile exchange between the United States and the faltering Russia would play out, and he basically said, okay, game's over, let's not waste any more time on this.

Well, maybe something like that went down, or maybe that was just the best PR the Cheney camp could leak. We probably won't know the real truth for a while yet, at least not from the generals and the elites at the top. But for a comrade-in-the-street's-eye-view of the momentous (yet borderline-absurd) end of the Cold War and the twilight of the much-feared USSR, check out filmmaker Robin Hessman's MY PERESTROIKA, screening free of charge (but with practically no publicity; gotta love that capitalism) on the Case Western-Reserve University campus this week, with the filmmaker in attendance.

MY PERESTROIKA compiles oral histories (backed up by Russian archival footage) told by five honest, ordinary Muscovites who were children and young adults in the 1980s and 1990s, when the Soviet Union's dynamic new leader Mikhail Gorbachev oversaw a new period of social liberalism that (unintentionally) spelled the downfall of the communist superpower.

A punk-like roughneck named Ruslan fronted a popular rock-protest band called NAIV from 1988 to 2000. Though police persecuted them back in the day, NAIV is now remembered with nostalgia, and Ruslan still takes to the stage from time to time for rowdy loyal fans (hey, he must be Russia's equivalent of Michael Stanley). Andrei adapted well to the end of socialism and the onset of free markets, becoming a successful proprietor of a chain of clothing stores and living comfortably.

We learn that, following the drawn-out decline and death of Premier Leonid Brezhnev, Russian kids would amuse themselves by holding their own mock-solemn "Brezhnev funerals" in imitation of the national mourning (compare-contrast decadent capitalist-pig USA kids crippling themselves doing "backyard wrestling" stunts in much the same spirit). It's also a revelation that Soviet news media used murky black-and-white film footage for TV broadcasts, practically right up to the dissolution.

It was truly a different world, and the witnesses here at least seem to regard the upheavals they experienced with a sort of resigned bemusement, more so than anger or resentment. We contemporary American viewers, who also went through all those A-bomb civil-defense drills in a US-Soviet feud that, for a long time, seemed destined to end in full RED DAWN military confrontation (I often get the feeling many survivalist-types are heartbroken it did not), might also get a weird vibe from MY PERESTROIKA. The haunting idea that, had things gone differently, these five friendly just-trying-to-get-through-the-day urban proletariats and their families would have instead met us dutifully on a radioactive battlefield, in Red Army uniforms and fixed bayonets, instead of peacefully here on projected-video in University Circle. (3 out of 4 stars)