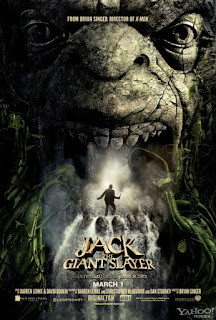 With complete soulless efficiency, JACK THE GIANT SLAYER delivers exactly what it promises. If you want to see a group of mostly respectable actors (Stanley Tucci, Ewan McGregor, Ian McShane) pretending to run away from and occasionally fight computer generated giants in computer generated environments, you've got it. If, on the other hand, you were hoping for an ounce of originality, inspiration, or passion, too bad. The plot is a “hero's journey” story so generic if feels like the script was written using a Mad Libs template, with the five (five!) credited writers taking turns filling in the blanks. The battle scenes and some of the music feel like leftovers from Peter Jackson's LORD OF THE RINGS/HOBBIT films, and to give you some idea of how fresh the dialogue is, the old, “there's something behind me, isn't there?” line gets trotted out not once, but twice. To top it all off we also get a pair of young and attractive romantic leads (Nicholas Hoult and Eleanor Tomlinson) who have absolutely no chemistry between them, let alone charisma of their own. Then there's also what may be a career low for first-rate character actor Bill Nighy, who has done more than his share of bad movies, as the voice/motion-capture model for the main giant.

You tend to expect such depressing mediocrity from Hollywood fantasy films these days, and are rarely disappointed (see: the recent remake of CLASH OF THE TITANS, SNOW WHITE AND THE HUNTSMAN, COWBOYS AND ALIENS, etc, etc.). What you don't expect is that such a waste of time would come from a director with the reputation and talent of Bryan Singer. You know, the same guy who wowed everyone with his indie hit THE USUAL SUSPECTS? The guy who managed to make a super hero movie, THE X-MEN, that managed to be a blockbuster hit without sacrificing intelligence or integrity? That Bryan Singer didn't show up for this movie. Heck, we didn't even get the Bryan Singer who made the sincere misfire SUPERMAN RETURNS. Instead we got the one who made 1313 Mockingbird Lane, last year's painfully bad update of The Munsters that was mercifully canceled after the pilot episode.

Of course there will be people who like this movie. I overheard some of them leaving the screening I attended, telling the studio rep how much they enjoyed the film. I can only assume that these people don't realize that movies can and should be better than this, even effects-heavy, pure entertainment popcorn movies. You sometimes hear people make lazy critiques of movies like this by comparing them to video games, but frankly that's an insult to video games, many of which have plots, characters, and ideas far more original and interesting than what you'll find here. If all the studios want to give us these days is a computer generated fantasy anyway, better to just stay at home and play the new BIOSHOCK. 1 1/2 out of 4 stars.
Posted by Bob Ignizio at 12:02 AM