[HITLER'S CHILDREN screens Sunday March 17th at 1:30 pm and Wednesday March 20th at 7:00 pm at the Cleveland Museum of Art.] 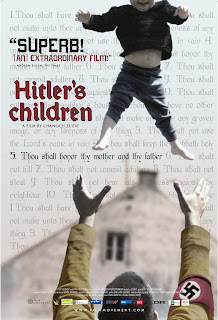 The stories of Holocaust survivors are by now familiar, but what of the children of the Nazis – the offspring of notorious higher-ups in the murderous regime? Their misfortune was to be born to men who killed or oversaw the killing of tens of thousands of Jews and other victims of genocide. Sometimes the killing was taking place directly outside their idyllic homes, as with the father of Rainer Hoess, whose grandfather was Rudolf Hoess, creator and commandant of the Auschwitz Concentration Camp  (not to be confused with Hitler's Deputy Führer, Rudolf Hess). Rainer's father played with toy cars made by Auschwitz prisoners, who were tortured, murdered and incinerated just beyond the garden gate where he played.

Rainer, the grandson, carries guilt over the horrible acts committed by his grandfather, even though he had nothing to do with it. He is one of five descendants of prominent Nazis featured in Chanoch Zeevi's arresting documentary HITLER'S CHILDREN. All of the descendants articulately describe the feelings of guilt and shame they have carried because of their lineage, and the ways they have tried to deal with their ghastly legacies. Bettina Goering, great-niece of Hermann Göring, a member of Hitler's inner circle who ordered the extermination of European Jews, emigrated to a remote part of New Mexico to try to leave behind her blood ties and the negative associations of her German nationality. “I carry the baggage of German society with me,” she says, and assuages her occasional longing for her native culture with occasional home gatherings devoted to German food, music and culture. Katrina Himmler, great-niece of Nazi second-in-command Heinrich Himmler, says that since World War II, it is a burden to be German. When abroad, she doesn't speak German and is “thrilled” when mistaken for Dutch or Swedish. She is married to an Israeli, who is descended from Holocaust survivors, and admits that when they argue, sometimes their family histories are brandished as weapons.

The adult children describe the painful dissonance caused by the realization that their parents, uncles or grandparents were guilty of horrendous crimes. They loved their parents, were taught to honor them, and were largely unaware of the crimes they committed. With atrocities of such magnitude, forgiveness isn't an option.

Two of the grown children dealt with their feelings by writing books. Ms. Himmler wrote a family biography titled The Himmler Brothers, and Niklas Frank, son of Hans Frank, the Governor-General responsible for the ghettos and concentration camps in Nazi-occupied Poland, wrote an excoriating denunciation of his father, whom he calls “a typical German monster.” He visits schools and gives honest, disturbing talks about his father's murderous crimes and his sense of relief when his father was hanged at Nuremberg. His anger is still fresh as he reads a passage from his memoir, The Father: “I had a happy childhood in that sea of blood.” Talking to students, who sometimes look quite bored, is therapeutic for Niklas. “Each time, I execute my parents anew.”

Monika Goeth, daughter of Amon Goeth, did not comprehend her father's prominent role in Holocaust atrocities until she saw the film Schindler's List, and saw a portrayal of Amon, the sadistic commandant of the Plaszów Concentration Camp. Seeing the film sent her into a state of acute shock. She thought, “These things couldn't have happened!” Not that she hadn't had suspicions: when she was a child and asked too many questions about whether her father killed Jews, her mother whipped her severely with an electrical cable.

In a quietly dramatic sequence, the film chronicles Rainer Hoess' journey by train to visit Auschwitz. Accompanied by Israeli journalist Eldad Beck, whose grandparents perished in the Holocaust, the younger Hoess shares his fears about the visit and the possibility of being “recognized” for his resemblance to his ancestor.

Israeli director Zeevi elicits fascinating insights from the descendants and sheds light on a previously unexplored corner of Holocaust history. 4 out of 4 stars.