[If you've somehow managed to avoid seeing the trailer for G.I. JOE: RETALIATION, which gives away major plot points, consider this your SPOILER ALERT.] 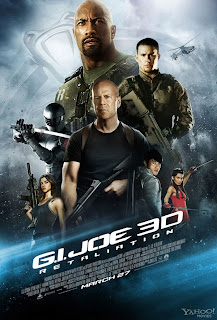 You have to admit, killing off almost all the heroes from the previous film in one fell swoop is an ballsy way to start a sequel. That should have been a “holy @$&! moment for the fanboys except this particular aspect of G.I. JOE: RETALLIATION was given away by the film's trailer. It's kind of like if the trailer for PSYCHO had included the shower scene. Okay, I realize that mentioning a glorified toy commercial like this in the same breath as Alfred Hitchcock's classic masterpiece of suspense is like comparing the Mona Lisa to the average six year old's crayon drawing, but even a schlocky cash grab like RETALIATION should have been allowed to keep its surprises intact.

Anyway, the Joes, including team leader Hawk (Channing Tatum), are pretty much massacred when the President (Jonathan Pryce) orders an air strike on the elite force after they finish their latest mission. Of course it's not really the President, but Cobra's master of disguise Zartan, a plot element that was set up in the previous film. The only survivors of the air strike are Roadblock (Dwayne Johnson), Lady Jaye (Adrianne Palicki) and Flint (D.J. Cotrona). Don't fret, Joe fans, everyone's favorite ninja Snake Eyes (Ray Park) is elsewhere when this all goes down, so he's still on the board, too.

Aside from Zartan, the bad guys include Storm Shadow (Lee Byung-hun), Firefly (Ray Stevenson), and of course Cobra Commander (Luke Bracey with the voice of Robert Baker). For some reason, Destro gets left behind when Cobra Commander breaks out. In sharp contrast to their cartoon counterparts, Cobra in this film is a pretty lethal and efficient terrorist organization. Aside from killing most of the Joes, they also pull off a doomsday scenario that would make your average Bond villain green with envy, and even blow up a major country while making their demands just so everyone knows they're for real.

So yeah, the villains are a genuine threat, and Johnson's inherent screen charisma manages to make his one dimensional character likable. Bruce Willis also adds a little bit of fun to the proceedings as “the original G.I. Joe”. Unfortunately the script takes a few clunky digressions involving the death of the martial arts master who trained both Snake Eyes and Storm Shadow, and a character named Jinx (Elodie Yung) just shows up like we're supposed to know who she is (which, I guess I would if I were a hardcore fan of the toys/comics/TV show, but that should never be a prerequisite for watching a movie).

The action scenes aren't much to write home about, either. They're competently staged, but nothing that really wows an audience. That pretty much sums of the whole movie, actually. It's competently staged, but hardly the sort of thing that's going to blow anyone's mind. I can't say I liked it or disliked it. It just was. My guess is that most of the folks who would be excited at the prospect of a second G.I. Joe movie will probably be satisfied, even if most of their favorite characters do get killed. Beyond that core base, there's not much here of interest.  2 out of 4 stars.
Posted by Bob Ignizio at 12:01 AM