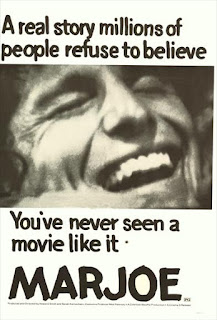 Sarah Kernochan, a two-time Oscar-winning filmmaker, will appear in person on Saturday, March 23 at the Cleveland Institute of Art Cinematheque, 11141 East Boulevard. Kernochan will answer questions after screenings of two of her movies: IMPROMPTU (1991), for which she wrote the screenplay, at 5:30 pm, and the full-length documentary MARJOE (1972),  which she co-directed with Howard Smith, at 8:30 pm. Admission to either film is $12, Cinematheque members $9; age 25 & under $8. One can see both movies for an additional $8.

Kernochan won her first Academy Award (for Best Documentary Feature) for MARJOE, a shocking portrait of Southern evangelist and charismatic con man Marjoe Gortner, who became a minor movie star and celebrity because of the film. Her second Oscar was for the 2002 documentary short subject “Thoth,” about a New York street musician. Kernochan is also a screenwriter (NINE ½ WEEKS and SOMMERSBY, in addition to IMPROMPTU), novelist, playwright, and singer-songwriter with two albums for RCA. She is married to Tony Award-winning director James Lapine, a frequent collaborator with Stephen Sondheim. Her website is www.sarahkernochan.com

An Evening with Sarah Kernochan

Winner of the Academy Award for Best Documentary Feature, this shocking exposé profiles charismatic, twentysomething Southern evangelist Marjoe Gortner. Marjoe began his career as a precocious child preacher but continued holding tent revivals (and milking his followers for money) long after he stopped believing. He comes clean for the cameras. Despite its Oscar, Marjoe was barely released in the American South; the distributor feared it would spark outrage. Co-director Sarah Kernochan will answer questions after the screening. Restored 35mm print courtesy of the Academy Film Archive (Cassie Blake). 88 min.