[BEYOND THE HILLS opens in Cleveland on Friday March 29th exclusively at the Cedar Lee Theatre.] 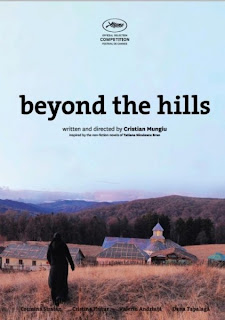 Even though BEYOND THE HILLS involves lesbian nuns and an exorcism, don't expect some sort of sleazy nunsploitation/possession flick. Voichiţa (Cosmina Stratan) and Alina (Cristina Flutur) are nothing like the sex-crazed sisters seen in films like THE SINFUL NUNS OF ST. VALENTINE, the full extent of their feelings for each other being conveyed with great subtlety. And the closest thing  to a demonic force is the harsh and unforgiving ideology espoused by “Papa” (Valeriu Andriuţa), the priest charged with running the Orthodox convent in Romania where this stark drama unfolds.

Certainly religion is assigned the most blame for the unfortunate events that transpire in the course of this film, which is based on a true incident. However it's also made clear that Alina has been let down by nearly every aspect of her society. Abandoned by her parents, cut loose by the orphanage where she and Voichita grew up, and treated with indifference by her foster parents, there's simply no support system for her. After Alina has a mental/emotional breakdown, she sees reconnecting with Voichita as her only lifeline and goes for what she believes will be a short stay at the convent. The girls make plans to leave for Germany and work together as waitresses, but Voichita is torn between her love for her friend and her devotion to God.

Eventually Voichita chooses God, and Alina has another breakdown. She's taken to a local hospital, but once again the system lets her down. Getting only cursory treatment, the doctor releases her to the nuns with a couple of prescriptions and a recommendation that reading scripture might well be the best cure for what ails the girl. It's unclear if the former indications are followed, but adherence to the convent's strict beliefs soon becomes a prerequisite for Alina staying there. Wanting nothing more than to be with Voichita she agrees, but eventually her behavior begins to worry the other nuns, leading to dire consequences.

Like many recent Romanian films, BEYOND THE HILLS is shot in a realistic, almost documentary fashion. There is no music and the performances are highly naturalistic. It is also quite long, another common trait of the films coming out of the former Soviet republic. It is an impeccably well made film that ends on an almost perfect symbolic final shot. Did I mention that it's also quite long? Yes? Well, it is. And one does feel the length at times. I understand why writer/director Cristian Mungiu uses this kind of pacing, and I can't say he's wrong to do so. I'm merely saying that personally, I would have preferred him to pick up the pace a little. It's a fine work, and I'm sure others will appreciate it even more than I did. But since I can only honestly talk about my own experience in watching any movie and not that of any hypothetical others, my star rating has to reflect my own feelings. And on those terms... 3 out of 4 stars.
Posted by Bob Ignizio at 12:15 AM