[56 UP opens in Cleveland on Friday March 8th exclusively at the Cedar Lee Theatre.] 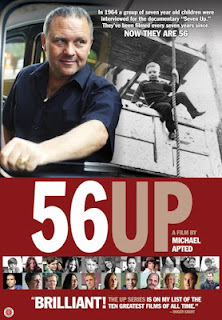 Every 7 years, for the past 49 years, the UP series has checked in with 14 average British citizens from various walks of life to see how life has treated them. With the exception of the first film, 7 UP, all of these installments have been directed by Michael Apted (Paul Almond directed the first one, but Apted was involved in selecting the subjects), maintaining continuity not just in terms of subjects, but style and point of view as well. In that time, the film's subjects have gone through many twists and turns and ups and downs in life. Some have bowed out for a few years only to pop back in, but surprisingly no one has died and only one subject (Charles) has dropped out apparently for good, leaving after the third installment 21 UP.

One need not have seen any of the previous films to appreciate this one, as there are ample enough flashbacks to put things into some kind of context. Of course the context is dictated by what Apted finds most interesting and important, pointing out that here, as in all “reality” programming and films, the degree to which reality is shaped by those observing and recording it. Even some of the film's subjects complain about the way they are presented on film and the effects that has had on their lives, notably Peter, who was pilloried in the press for criticizing the Thatcher government, and who dropped out of the project for a number of years because of that.

Whatever its shortcomings, the sheer scope and ambition of a project like this makes it worthy of notice in and of itself. No matter how much what we see has been shaped in the editing room, the fact remains that little pieces of human truth come through. 3 out of 4 stars.
Posted by Bob Ignizio at 12:05 AM