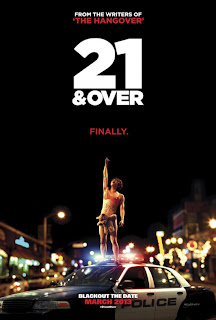 After watching the trailer for Scott Moore and Josh Lucas’ 21 AND OVER, which shamelessly touts the movie’s connection to THE HANGOVER (“From the writers of…”) and highlights a plot that looks more or less like that film’s collegiate clone, it’s no surprise that the duo’s newest outing (and directorial debut) runs a trio of debaucherous beta males through an ethanol-soaked gauntlet of hijinks, coincidence and tepid emotional epiphany.

Instead of an impending wedding, the film races toward an imminent med school interview. Rather than a missing groom, 21 AND OVER’s propelling MacGuffin is a campus apartment belonging to 21st birthday boy and med school applicant Jeff Chang (Justin Chong), to which his two visiting buddies, Casey (Skylar Austin) and Miller (Miles Taylor) are desperately attempting to return a blacked-out Chang for some much-needed beauty rest. Boozing their way through a labyrinth of ticked-off sorority pledges, adenoidal meatheads and campus police, the three assess the crumbling state of their friendship as they stare down the gullet of adulthood.

I guess what you really want to know about a film like this is whether or not it’s funny. Perception being subjective and all, 21 AND OVER is precisely as funny as it looks. If drunk college kids puking in slow motion, eating tampons, and stumbling across campus wearing naught but loin-sheathing tube socks tweak your funny bone, you won’t be disappointed. The film isn’t poorly assembled, and the 90-minute-runtime fits like a glove. I just wish it offered something I hadn’t seen before.

Even as a mindless bit of boozy raunch, it lacks the sheer force of character that permeated THE HANGOVER. Perhaps it wouldn’t rankle so much if both (conscious) protagonists didn’t feel like miscast understudies for two of that film’s roles - Miller a pale facsimile of Bradley Cooper’s dickish, impulsive Phil, and Casey a bland, neuroses-stripped analog for Ed Helms’ reserved Stu. It doesn’t help that 21 AND OVER’s several ethnic-themed gags (and, of course, that whole med school interview bit) can’t help but recall HAROLD AND KUMAR GO TO WHITE CASTLE - a similarly sophomoric two-man comedy that’s unflinching absurdity and winking commentary on the blanched, douchey whiteness of its genre brethren runs circles around 21 AND OVER’s formulaic comedy and, well, blanched, douchey whiteness.

As a purely utilitarian bonding agent for all the beer-swilling bacchanalia, the film’s emotional arc is appropriate enough. Where THE HANGOVER had a wedding and a bride, 21 AND OVER has the school interview and an overbearing father, but both are about the anxiety and nostalgia that wash over men living in the looming shadows cast by landmarks of adulthood. It’s a predictable Dear John letter to directionless freedom as deliberate independence takes its place.

The real disappointment is Jeff Chang’s story, which, from the moment his friends find a handgun in his pocket, has the potential to offer a pointed and bleakly humorous reflection on depression, and the difference between the healthy angst that comes with growing up and the clinical pathologies that can creep in and turn sadness into depression. Unfortunately, after more than an hour of foreboding clues and dark intimations, the whole thing fizzles out in thirty seconds of expositional dialogue and a wash of major key pop music. It’s the single, obvious missed opportunity in a movie that seems otherwise content to be an average slug of insipid fun.

I was conflicted as to how to handle 21 AND OVER - it's no dumber than it's trying to be, and the audience I watched it with seemed genuinely entertained (even clapped at the end like at one of them snooty French cinema-movies).

Then I had my own moment of youthful nostalgia: as a precocious 12-year-old, I once told my mom, who was trying to dissuade me from some ridiculous, idiotic comedy by telling me that critics hated it, that the one way you know a movie will be good is if it got bad reviews. Whatever that movie was, I’m as sure my mom would’ve loathed it as I am that I would have loved it. Mom and Li’l Me, this is for you: (2 out of 4 Stars)