We Are Legion: The Story of the Hacktivists (now on video) 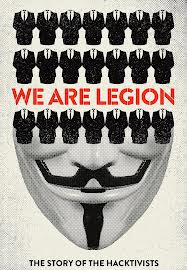 A short time ago, Cleveland Movie Blog editor Bob
Schedule
Ignizio posted his review of the documentary CLEANFLIX, an excellent nonfiction feature about the ironies of home-video movie censorship in Mormon territory that actually made a balanced case for LDS censors (it helps, of course, when the antagonists are powerful corporate-studio swine, even with their movie-director minions moaning about "artistic freedom"). Anyway, I had a review of that in my archive FIRST, but just sort of figured CLEANFLIX was a little too off-the-radar for you miserable Clevelanders, who probably want to hear more about garbage like Dance Moms (which I had to review also, BTW). I was going to pull CLEANFLIX out of mothballs if the Cedar Lee or Cinematheque or somebody had the good taste to premiere it on the big screen...but no. Ignizio tracked down watched the movie himself and scooped me.

Well, I'm not letting him pull that with WE ARE LEGION. I've got this smegging review, even though I'd be amazed if anyone here is worthy of this docu outside of those kewl programmers, DIY technophiles and hackers who put on NotaCon in Cleveland every spring. Or underemployed, disgruntled nerds like me who fantasize about unleashing Hell with a few keystrokes. So for the NotaCon gang benefit (and a wish that they'd use their haqr smarts to somehow get me a job somewhere; clear an employer's e-mail inbox of every single resume but mine, something like that), I'm going to review WE ARE LEGION right now. While Ignizio's probably still off somewhere drunk with power.

Brian Kappenberger's feature shows how 21st-century computer hackers channeled their savvy and talents for creative chaos into political protest, especially under a shadowy umbrella organization called Anonymous that inspires fear and outrageous law-enforcement backlash from time to time. And WE ARE LEGION is a 21st-century story, no nostalgic recap of the 1980s-1990s "cyberpunk" era, the Well, Oscar Weiner whistling "phone phreaks" getting free long distance, or Matthew Broderick almost triggering a thermonuclear incident with a lowly IBM XT in WARGAMES. I guess for the savvy viewer that stuff is considered ancient history, which is fair.

Kappenberger shows that more present-day uncensored website-forums such as 4chan.com and /b/ nurtured a large following of anything-goes anonymous posters, initially doing nothing so bombshell as reviewing Japanese animation or sharing porn files. Under the collective name "Anonymous" - the default handle for posting on 4chan - they began banding together for united action. First their target was a kind of wannabe AM-radio talk-show type, a certain Hal Turner, who hosted a racist podcast. The 4chan collective systematically harassed him and more or less ruined his life. That taste of activism gave much of the computer-chaos community a rush of righteousness. The others, who preferred apolitical nihilism, came up with a nickname for the do-gooders: "moral fags."

But the Church of Scientology presented a target too big for the Anonymous community to ignore. The Scientologists' infamous legal campaigns against dissidents trying to expose church secrets riled the hackers. In February, 2008, to humiliate and defy Scientology worldwide, Anonymous coordinated a worldwide mass-protest outside the cults' various regional offices. A great moment in the movie, this was actually the first widespread appearance of the Guy Fawkes mask worn by Occupy Wall Street types, an icon of Anonymous.

(See, you dumb filmmakers on Dianetics, if only you'd created V FOR VENDETTA instead of BATTLEFIELD EARTH, you'd have made a lot more friends with social-engineering skills. Maybe even had one of your Sea Org guys up for the new Pope)

The media, especially Fox News, hyped Anonymous and their brand of high-tech vigilante justice. The film shows the hacker collective reacting en masse, variously to help homegrown "Arab Spring" revolutionaries in Tunisia and Egypt, then to cripple PayPal in a campaign to assist Julian Assange during his Wikileaks-related persecution. High-tech attacks discussed range from the site-smashing software weapon dubbed the "Low Orbit Ion Cannon" to erasing an iPad by remote and having tons of pizzas delivered to a victim's door.

Police raids, arrests and security-force responses to Anonymous members may or may not seem heavy-handed, depending on one's opinion of the `hacktivists'; clearly the filmmakers are on their side. One interviewee claims that Anonymous wants a society in which the government fears the citizenry, not the other way around. Which comes close, word-for-word I believe, to what the Tea Party promotes, although the Tea Party come up on the roll-call of folks likely to be on Anonymous' bad side and are dismissed as religious-zealot gun-nuts.

This is very much an unfinished story, with the main message being that young power users in the cyber culture are not homebound slackers just playing World of Warcraft or Second Life all the time. They watch and they care and they act. When Anonymous threatens to bring the roof down, I listen, and if you see WE ARE LEGION, you will too. Now, Anonymous can aim that Low Orbit Ion Cannon away from the Cleveland Movie Blog . I am sure Mr. Ignizio only sinned out of ignorance. (3 out of 4 stars).
)
Posted by Charles Cassady Jr. at 12:27 AM