Up Tight! (now available on home video and streaming)

[UP TIGHT! is now available on DVD, Blu-Ray, and streaming via Netflix. Thanks to R.J. Justavick for bringing this film and its availability on Netflix to my attention.] 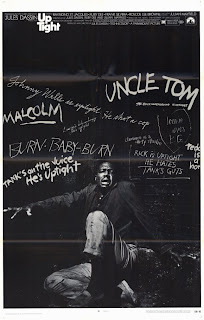 UP TIGHT! shows how the assassination of Martin Luther King, Jr. led some in the civil rights movement to abandon the path of nonviolence in favor of militancy. A group of young black radicals in Cleveland, Ohio called The Committee have a plan to steal guns for their cause. However, one of the group's older members, Tank (Julian Mayfield), is too drunk to participate as planned. Johnny (Max Julien), the group's defacto leader and Tank's best friend, is disgusted but decides to go ahead with the theft anyway. They get the guns, but not before Johnny exchanges shots with the night watchman. The watchman is mortally wounded, and in his hurry to escape Johnny leaves behind evidence that places him at the scene. In the aftermath The Committee decide to kick Tank out, setting the stage for betrayal and tragedy.

An remake of the 1935 John Ford film THE INFORMER, the updated screenplay for UP TIGHT! was written by director Jules Dassin and his stars Julian Mayfield and Ruby Dee (who plays Tank's girlfriend Laurie, as well as being one of the film's producers). It's clear that Dassin and his co-writers are ambivalent about The Committee's militant stance; while they understand and sympathize with the radicals, their path as ultimately shown to be self destructive. At the same time, the film doesn't offer any pat, easy alternatives or try to give us a heroic counterpoint to the militants. It seems to say that violence isn't the answer, but when even nonviolent leaders like Dr. King get shot down, what is?

UP TIGHT! deserves a good deal of credit for taking a nuanced look at the radical side of the civil rights movement that tended to either be ignored by Hollywood or given a more cartoonish portrayal in blacksploitation movies. Where modern audiences might have difficulty with the film is in the acting and directorial styles which feel a bit dated. In particular, there are a few set-bound sequences heavy on the dialogue in which the delivery of the actors feels especially stagey. On the other hand, the scenes shot on location and/or involving action still come across as gritty and believable, augmented by the excellent instrumental soundtrack by Booker T. and the M.G.'s.

For Clevelander's there's more of interest to UP TIGHT! than just the film itself. It was largely shot in the Hough neighborhood, post-riots, but also ventures into downtown and the Flatsand includes shots of Cleveland's Burlesque/red light district and some kind of arcade that appears to have been on the waterfront. A lot of what the film shows us is gone now, making the film a real time capsule. And be sure to look for local TV news icon Leon Bibb in the cast as Mr. Oakley.

Oops, turns out there's another Leon Bibb, and he's the one in this movie.