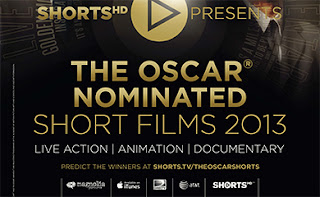 Henry – we are introduced to henry, an elderly musician, as he is playing piano in his home. We then follow him as he goes out for lunch at a café where he is encounters a middle aged woman who is out of breath for some reason. Henry asks her to sit down and the two begin discussing Henry's past when he notices a man in a wheelchair staring at him. Henry goes over to confront the man who offers a cryptic warning; “they're looking for you, Henry. Don't let them get you,” further adding that Henry's wife Maria is in danger.

When Henry returns home looking for Maria, the words of the stranger prove true. Before Henry has time to react, he is restrained and drugged by unknown assailants. Upon waking Henry finds himself strapped to a bed, with the woman from the café apparently his captor. Does Henry have some dark secret from his past that has come back to haunt him? As it turns out the film has cleverly misdirected us. It's not the thriller it seems to be, but a poignant drama about aging that uses the structure and techniques of a thriller to very different ends.

I suppose you could call this a “twist” movie, but rather than the whole point being the twist, the twist very effectively serves the story. Nothing about Henry feels gimmicky, and the film offers far deeper rewards than mere cheap surprise. I'm not familiar with the cast, who are mostly veterans of French Canadian TV, but performances are universally excellent. French Canadian TV is also were writer/director Yan England comes from, although he too is primarily known as an actor. If this film is any indication, he may want to consider being on the other side of the camera more often. This is the one that should win.

Asad – a Somalian boy named Asad wants to join with his pirate friends, but is told he's too young. So while the pirates go out on their latest mission, Asad talks with the old fisherman in his village, who assures the boy that one day he will bring back the biggest catch anyone has ever seen. ASAD aims to be a tribute to the spirit of hope living in the hearts of the Somali people despite all the horrible things their country has been through in recent years that comes up short with an ending that mixes tragedy, goofy humor, and would-be uplift. Even if one gets the symbolism of the white “lion”, it still feels trite.

Death Of A Shadow – Drenched in an atmosphere of the fantastic and cheap emotional manipulation, Death Of A Shadow is all concept and visual style with no substance, no compelling story, and no interesting characters. Sure, writer/director Tom Van Avermaet does convey his theme of making sacrifices in the name of love, but mostly he just seems intersted in how everything looks.

Curfew – junkie Richard's bathtub suicide attempt is interrupted by a frantic call from his sister. She needs someone to watch her little girl Sophia. Things are obviously desperate if she's calling Richard, which perhaps awakens some dormant spark of responsibility and will to live in the man. He decides to postpone death for at least one more night and take on the task. This one is a bit operatic and rife with movie clichés, but it hits the right emotional chords without being clumsy about it and ultimately delivers a moving little drama.

Buzkashi Boys- Set in Kabul, Afghanistan, this short centers on two young boys; Rafi works for his father, while Ahmad is an orphan who begs on the streets. After watching watching a local sporting event called Buzkashi in which riders on horseback fight each other for possession of a dead goat, the beggar boy announces that one day he will be a Buzkashi rider. His friend, however, is resigned to his fate to be a blacksmith like his father. And then something happens that changes everything.

Not only is Buzkashi Boys the closest to a feature of all the nominees in terms of running time (it's a half hour), it also feels like a feature in terms of theme, story, and presentation. This isn't just a little slice of life or concept piece, but a drama with a full arc. The cinematography finds beauty in both nature and in the rubble of fallen palaces. While it's equally moving as Henry, it's neither as fresh or clever. Still, a very solid film overall and one with a real shot at winning the award.
Posted by Bob Ignizio at 12:00 AM