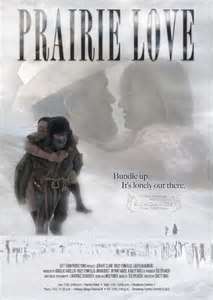 One recent movie that I'm sure will get tagged with "Lynchian" and "like FARGO" is PRAIRIE LOVE, an item from the memorably named director Dusty Bias. Lynchian? You could say that. Like FARGO? I'm sure lots have said that. But what the tragicomedy most recalled for me were the terse, deadpan narratives of Finland's Aki Kaurismaki, best known for LENINGRAD COWBOYS GO AMERICA - which was practically LucasFilm for Kaurismaki; I'd go back to his less commercial stuff like ARIEL.

Lots of long, wordless takes in widescreen-apt settings, shot with a largely static camera, featuring dispirited or blank-ish protagonists who just stare at faraway stuff, maybe deep in thought and memory, maybe not. Though very a la mode with the art-house crowd and tastemakers rebelling against MTV and digital-editing action-crap, it can be a bit much (or less, as the case may be).

Mr. Bias' off-off Hollywood setting is his native soil, the desolate, snow-covered prairies of North Dakota in deep winter - evidently the movie was shot during the worst winter the state had suffered since 1936. We see a nameless deer hunter with a carcass on his roof. The guy is evidently so lonesome he listens to female self-improvement cassette tapes in his car audio system, just for some simulation of sensuous womanly companionship. The hunter comes across a broken-down car and a half-frozen motorist in the road. He's Nathan, AKA "NoDak" (as in `North Dakota'), a guy from a tiny community near the Canadian border. Nathan was en route to a women's penitentiary, where he had an appointed rendezvous with a prisoner with whom he had been carrying on a steamy "affair" via pen-pal letters.

The hunter reads the letters and summarily commits the worst kind of identity theft (one you'll probably remember more than you will IDENTITY THIEF). Masquerading as Nathan, the would-be suitor arrives at the prison and collects the sweetly oblivious inmate, just gaining her release (we never learn her crime or her name). She's a doughy, sunshiny blonde, and for a while the strange couple enjoy an idyll in motels and abandoned farmsteads that dot the white landscape, until the hard truth comes out that `Nathan' is not whom he seems. And "prairie love" is apparently a much harsher term than you'd think.

In his notes, filmmaker Bias says that out in North Dakota there really are spreads like that - houses in the middle of nowhere that just seem to have been abandoned overnight, as if the residents could no longer tolerate the extreme isolation (here it would be foreclosure). And, much as North Dakota's assorted Chambers of Commerce (or film commissions) would beg to disagree, the brief, sardonic picture could well be seen as a critique of the environment, endless miles of flat nothingness that create such stunted characters, who are probably all half-mad. I haven't seen very much cinema at all from the Dakotas, and those few that I did - a nice little Indian ghost story, a compact, retro-noir B&W crime thriller - were well done. But it's PRAIRIE LOVE that milks the wide-open, featureless environment and the hardscrabble culture for all it's worth.

And if that suggests to you a great place for the Leningrad Cowboys to set up and jam, great. If it's just a notion that would give Cleveland in STRANGER THAN PARADISE a rival in sheer bleakness, then maybe MTV isn't so bad after all. (2 3/4 out of 4 stars)
Posted by Charles Cassady Jr. at 12:00 AM