Port of Shadows (February 19th at the Capitol Theatre)

[PORT OF SHADOWS is screens Tuesday February 19th at the Capitol Theatre at 7:00 pm. Presented by the Cleveland Cinematheque.] 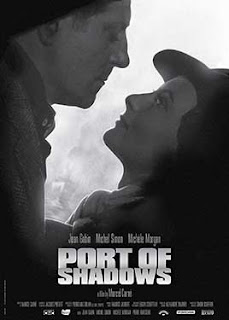 French deserter Jean (Jean Gabin) is bitter and hungry when he hitches a ride on a truck. He shows he still has a compassionate side when he forces the driver to swerve to avoid hitting a dog that leads to a confrontation between driver and passenger. Cooler heads eventually prevail, but the near fight allows Jean to naturally comment on his views about patriotism and the emotional toll that comes from killing someone with a gun, something we gather he knows from personal experience.

After Jean is dropped off, he and the dog, who refuses to leave his side, make their way to the port town of Le Havre where they find refuge at a rundown bar. There Jean meets Nelly (Michèle Morgan) and jokingly declares it's love at first sight before going on a diatribe about romance and women. As the two actually talk to each other, however, a real connection is formed and the idea of love begins to seem less preposterous. Standing in the way of the couple's happiness are Nelly's lecherous guardian Zabel (Michel Simon) and small time gangster Lucien (Pierre Brasseur), as well as Jean's own sense of self preservation which is urging him to hop on a boat to Venezuela before the army or some other dark fate catches up with him.

There is a surface sheen to PORT OF SHADOWS that at first glance makes it appear to be in the same mold as romantic Hollywood films of the era. One doesn't need to look too far beneath that gloss, however, to realize that what director Marcel Carné and screenwriter Jacques Prévert have really made is a film that subverts romantic notions. Not just the fantasy of happily ever after, but even more controversial issues. With its hero a psychologically scarred war deserter, it's embrace of moral relativism, and a sense of impending doom from its very first first frame, PORT has more in common with the film noirs of the 40s that it preceded by a few years than most films of its own time. Its grim world view is perhaps best summed up by one of the bar patrons, an unnamed painter (Robert Le Vigan), thusly: “Some people go fishing or hunting or go to war. Others commit crimes of passion. Some commit suicide. You have to kill someone.”

Beyond the meat of the film, it's also interesting to note a few bits here and that would never have passed muster in American cinema at the time. In particular, only a European film could have shown its two leads in bed discussing their lovemaking the night before. In Hollywood, even married couples would still be relegated to separate beds for years to come.

With its pulpy subject matter and breezy 90 minute running time, PORT OF SHADOWS doesn't aim for the same level of epic grandeur as Carné and Prevert's perennial critics' favorite CHILDREN OF PARADISE. On its own terms, however, it's still and excellent film of considerable depth and potency. It's also quite accessible even for those outside the usual arthouse crowd, provided they don't mind subtitles. It's got romance, it's got gangsters, it's got a cute dog, and it's all delivered with style and attitude. What's not to like? 3 1/2 out of 4 stars.