[MY NEIGHBORS THE YAMADAS screens Saturday February 16th at 9:10 pm and Sunday February 17th at 6:30 pm at the Cleveland Cinematheque.] 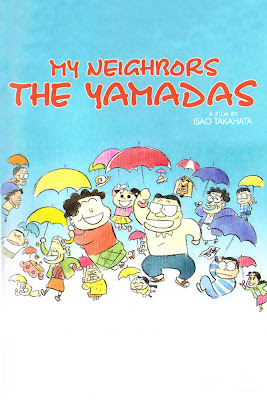 Another Studio Ghibli film, MY NEIGHBORS THE YAMADAS is a non-linear story about the routinely chaotic life of a Japanese family living in 1999. Directed by the famous Isao Takahata (GRAVE OF THE FIREFLIES), there is no solid story arc in MY NEIGHBORS THE YAMADAS. Instead, it consists of short segments – episodes – about the Yamadas and their everyday adventures. Some of the stories deal with rather mundane topics but are interspersed with charming bits of comedy. Other segments deal with heavier topics but also have subtle comedic undertones. Not your typical anime film but it was fun. I also loved the spontaneous bursts into song. The music was definitely a strong point.

The Yamadas are your typical family: the overworked, often sarcastic father, the annoyed, not always compliant housewife, the idealistic daughter, the resistant son, and the brash, nagging grandmother. In one story, the family forgets the daughter, Nonoko, at the mall. In another, the grandmother visits a friend who’s plagued with, what can be assumed, a terminal illness. Each story is accompanied with a closing Haiku. A nice touch, really. After each story, you’ll fall more and more in love with the Yamadas.

The animation is a bit wacky and it took me awhile to adjust. Once I did, I realized that the animation was incredibly nuanced and detailed. Overall, the film was charming and endearing. Though, I did find myself struggling as the film was overly long and sometimes lagged. MY NEIGHBORS THE YAMADAS is very fun and will appeal to both adults and children. Many of the more subtle jokes and references will resonate well with those who’ve experienced the chaos of ordinary family life. If you’re interested in anime and Studio Ghibli, I wouldn’t miss this one. I didn’t find it overly compelling and it’s certainly not as moving as Takahata’s GRAVE OF THE FIREFLIESbut it’s solidly executed and enjoyable. 2 1/2 stars out of 4

Posted by Marcie Gainer at 3:23 PM