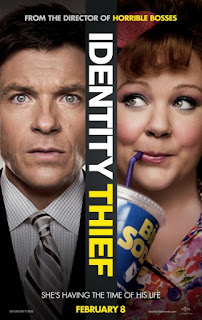 When a deceptively devious Diana (Melissa McCarthy) steals honest family man Sandy’s (Jason Batman) identity over the phone, Sandy sets out for Florida to get revenge on the thief. The innocent and the guilty clash when Sandy makes a citizen’s arrests and tries to wrangle his prisoner back to Colorado. Comedy ensues, but so do car chases, violence, vulgarity and a snake attack. With each new shift and each new character comes a new flimsy set-up. Unfortunately the result distracts from two good performances and makes the film feel, well, like a really long road trip with someone you don’t like.

Bateman, who achieved cult fame in television series Arrested Development (which returns for another series to be released on Netflix in May) has yet to achieve quite the same success on the silver screen. In spite of his funny, charming performance in IDENTITY THIEF, this isn’t a homerun. Dark and emotional struggles within the characters in this movie should have added welcome depth and played to Bateman’s indie-type strengths – as in JUNO and UP IN THE AIR – but it turns out forced and unreasonable.

McCarthy proves without a doubt that she can carry a lead role. We already knew she could please a crowd from her breakout role in BRIDESMAIDS. In this movie, her character is a professional identity stealer. She lives high on the hog on stolen money and – in place of finding her own identity – she clings to her stolen stuff.
With two such great characters, it was the cinematic hodgepodge that interrupted the only storyline that was working. Together, the duo is chased by hit men, bounty hunters, cops and – as mentioned before, and for no apparent reason – a snake. I could get over the initial farfetched motivation: when his identity is stolen, Sandy is wrongfully accused of the thief’s crimes. The police don’t seem to care, and for some reason his boss threatens to fire him even when the police discover the mix-up. Sandy negotiates a plan to bring the thief back to his office to confess to his boss. Okay, there are some holes here, but I’m still game for some laughs.

But they just don’t come. The humor is cheap and mostly unoriginal, trotting out such tired material as jokes about Bateman’s character having a girl’s name- Sandy. Minus a handful of exchanges between McCarthy and Bateman, the film is flat, and some heavy-handed and somewhat aggressive emotional breakthroughs didn’t help the situation.

Director Seth Gordon knows comedy – he’s directed television episodes of some of TV’s funniest sitcoms (Parks and Recreation, Modern Family, The Office). He also has some memorable documentaries to his name (THE KING OF KONG, FREAKONOMICS). In this film, though, there was no restraint. It was just too much, and as it drags on the film loses its own identity. 1 1/2 out of 4 stars.
Posted by Joseph Anthony at 10:46 AM