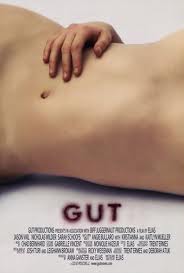 The Zen wise man says the secret to happiness and fulfillment is to do one thing. And do it well. All your life. A good illustration of this was last year's documentary sleeper JIRO DREAMS OF SUSHI, about the old Tokyo guy who is acknowledged, respected and cherished as the world's greatest sushi chef. He has mastered his art and has never done anything else. He has attained sublime grace within his Zen avocation.

Well, I found out I could do movie reviews rather well. So, Jiro-like, I concentrated on that all my life. And now I'm broke, lonely and miserable. So f*@! Zen masters. I'm kind of losing my taste for sushi as well.

But the East Coast folks who made the digital-video horror effort GUT are not giving up, it seems, on the elegance of Eastern philosophy. These artists du cinema found they could do one thing well - construct a lifelike human abdomen, albeit a conspicuously trim and feminine looking one (translation: no fat chicks). They could fill it full of syrup-ish fake blood and engineer it to look like a marauder could take a wicked-looking blade, slit the belly open vertically and plunge a hand inside and grope around. They do that pretty well - and thus in the movie they do it again and again.

A hell of a way to attain Enlightenment if you ask me, Master Po.

Wrought by a one-named filmmaker called Elias (never trust filmmakers with just one name - McG, you owe me for THIS MEANS WAR), the minimalist plot of GUT focuses on Tom, a family man and office drone who, as a boy, made backyard slasher videos with Dan, a horror-obsessed childhood friend. Tom and Dan now occupy nearby cubicles working in a nondescript office, and while Tom has matured a bit to the point of having a cute wife and daughter, Dan is still a creepy gorehound, upset that Tom is growing apart from him. He convinces Tom to have another boys'-nite-out to watch horror.

Dan is especially enthused with something he claims to have downloaded off the internet. It's a snuff-like snippet showing a female torso being cut open, and Dan wonders if the carnage is real or fake. Tom, though feigning disinterest, grows obsessed with the sight, and he starts to have visions of his own sexy wife's taut stomach getting slit. Which, understandably, interferes with the couple's intimacy.

Meanwhile, inserts show the gut-cutting taking place, evidently unsimulated, with captive live victims. But who is the murderer? Tom? Dan? Someone else? Well, given the budget and/or script horizons didn't call for very many more actors, the narrative options are kind of limited on that one.

Filming is practically Bressonian-austere, with shots ending more often than not in simple blackouts and transitions, nothing fancy, but competent enough for film school or a Hollywood calling-card. Again, the picture doesn't really function for much except for the periodic torture-porn f/x of bellies being knifed open. And, for the information of those who get off on that, there is just the blood - no viscera or intestines spilling out. Heck, even old Herschell Gordon Lewis, in his BLOOD FEAST (that I might assume Elias admires), had some chicken gizzards to substitute for internal organs or whatever. Oh well, I'm as much for kindness to animals and veganism as the next liberal, so I guess that just isn't technologically feasible anymore.

But even H.G. Lewis insinuated gallows humor and bad jokes into his anti-masterwork of "Egyptian feasts." I'm not saying I liked it any more, but BLOOD FEAST did have the camp element going or it. GUT, like the prop midriffs, just sort of lies there onscreen, daring you to make it through.

The no-name cast work pretty hard, considering, and at least the thing wasn't a gonzo Troma splatterfest (the irresistible blurb: "This Movie Has Guts"). But for me the lone highlight came after the end credits, the Gahan Wilson-ish animated logo of production outfit Biff Juggernaut. Cute. Overall, the one-trick GUT could have been less digestible, and that's all I can say. Could have been worse; note that the title BOWELS is still up for grabs. (1 1/4 out of 4 stars)